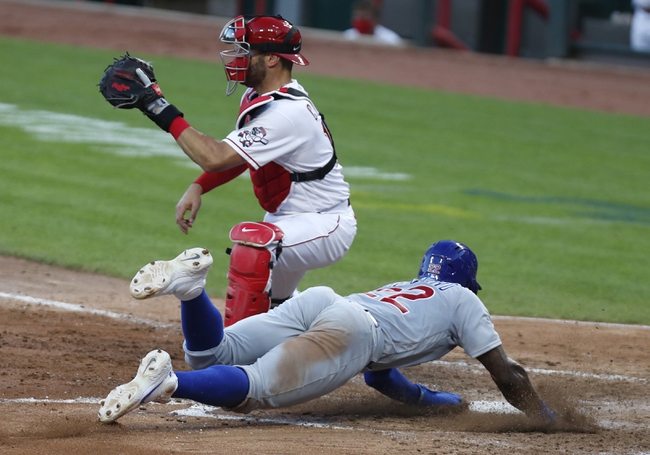 TV: FS-Ohio, Marquee Stream the MLB Game of the Day all season on ESPN+. Sign up now!

The Chicago Cubs and the Cincinnati Reds meet in an NL Central division matchup from Great American Ballpark on Wednesday night.

The Chicago Cubs will look to build off of an 8-5 win over the Reds in game two on Tuesday. Javier Baez led the Cubs by going 3 for 5 with a pair of homers, a double and three RBIs while Nico Hoerner added two RBIs and David Bote belted a solo home run. Jason Kipnis went 2 for 4 with a triple and an RBI and Kyle Schwarber chipped in an RBI as well to cap off Chicago’s scoring as a team in the win. Jason Heyward, Victor Caratini and Anthony Rizzo each added a base knock as well in the victory. Alec Mills got the win to improve to 1-0 after allowing two runs on two hits while striking out three over six innings of work. Kyle Hendricks will start game three and is 1-0 with a 0.00 ERA and 9 strikeouts this season. In his career, Hendricks is 6-3 with a 3.84 ERA and 91 strikeouts against Cincinnati.

The Cincinnati Reds will try to rebound from their loss in game two on Wednesday. Nick Castellanos led the way, going 2 for 4 with a two-run home run and a double while Freddy Galvis added a two-run shot of his own. Curt Casali added a home run of his own to round out Cincinnati’s scoring as a team in the losing effort. Phillip Ervin and Eugenio Suarez each added a base hit as well as the Reds cranked out just six hits as a team in the losing effort. Tyler Mahle allowed two runs on six hits while striking out four over four innings of work, not factoring in the decision. Cody Reed took the loss in relief to fall to 0-1 this year. Sonny Gray will start game three and is 1-0 with a 1.50 ERA and 9 strikeouts this season. In his career, Gray is 3-2 with a 2.83 ERA and 29 strikeouts against the Cubs.

Head-to-head, the over is 32-15-5 in the last 52 meetings between these two teams in Cincinnati.

It’s hard for me to turn down the low line with the way the Cubs have been playing, but Hendricks was pretty bad on the road last year, sporting an ERA over five and had a 5.16 ERA against Cincinnati last season. On the other hand, Gray was good for the Reds in his first start, but Cincinnati’s fallen off since then. Instead of trying to pick a side, I’m going to go with the under. Both hurlers had some awesome stuff going in their first game and I think we see a duel here so I’ll back the under