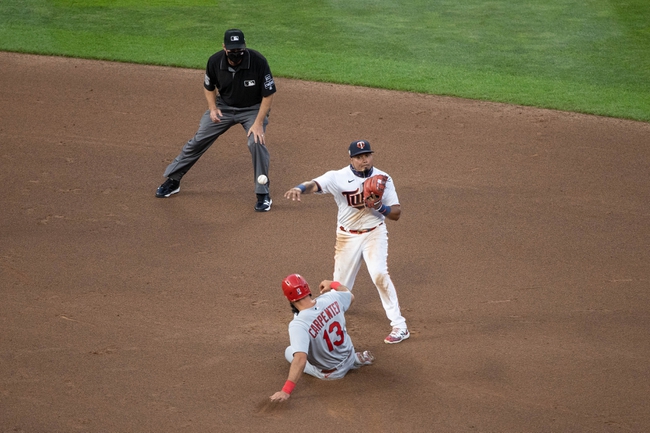 TV: FSN, FSMW Stream the MLB Game of the Day all season on ESPN+. Sign up now!

The St. Louis Cardinals and the Minnesota Twins meet Wednesday in MLB action from Target Field.

This will be the second game in a pair featuring these teams this week. In Tuesday’s game one, Minnesota jumped out to a 5-0 lead after two innings and powered out an eventual 6-3 win.  Check back all season long for free MLB picks and MLB predictions at Sports Chat Place.

St. Louis was doomed by a bad outing from starter Carlos Martinez on Tuesday. Martinez went just 3.2 innings, allowing seven hits and six earned runs. The good news is that the bullpen didn’t allow a hit after that. Tommy Edman was an offensive standout with a double, two hits, a run and an RBI.
For Wednesday’s game, the Cardinals will go with Daniel Ponce de Leon in the start. This was originally supposed to be Miles Mikolas’ first start of the season, but he’s been shut down again due to injury. As for Ponce de Leon, he managed a 3.70 ERA over 48.2 innings of work last season.

Over on the Minnesota side, they got some solid offensive performances in the Tuesday victory. Josh Donaldson and Jorge Polanco each had two hits, two RBI, a homer and a run. Max Kepler added a hit, an RBI and a run himself. On the mound, starter Homer Bailey made it through 5.0 innings with four hits, two earned and two walked with four Ks.

For the Wednesday outing, the Twins will go with Rich Hill in the start. Hill experienced some minor soreness over the weekend and had his Saturday start pushed back, but he should be good to go. In 2019, Hill managed a 4-1 record with a 2.45 ERA and 72 strikeouts in 58.2 innings.

Pick: Going Twins. Although Ponce de Leon has filled in admirably as a spot starter over the last year or so, it may end up being a tough job for him to produce a significant amount of innings here. Mikolas should be able to hold things together pretty well on the other side, so this one is probably going to be a lower-scoring affair unless a pen implodes. I like the Twins to break through in the later innings and bang out a win here.