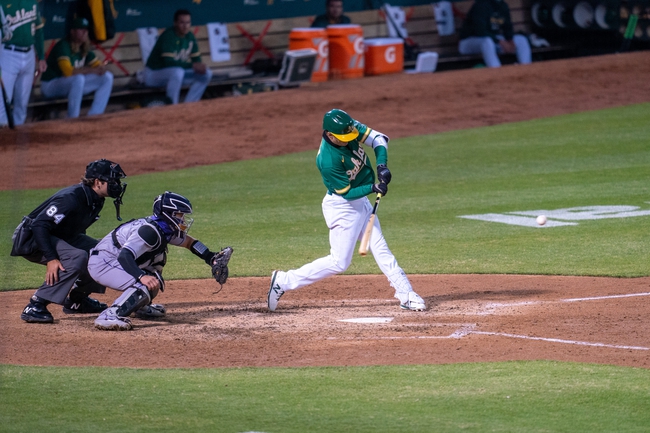 TV: ESPN, NBCS-California, ATT-RM Stream the MLB Game of the Day all season on ESPN+. Sign up now!

The Colorado Rockies and the Oakland A’s meet in MLB action from the Oakland Coliseum on Wednesday afternoon.

The Colorado Rockies will look to build off of an 8-3 win over the A’s in Tuesday’s series opener. Sam Hilliard and David Dahl each had two RBIs with Dahl adding a double while Hilliard belted a two-run home run and a double of his own. Tony Wolters had a double and an RBI while Nolan Arenado, Daniel Murphy and Raimel Tapia each chipped in RBIs to round out Colorado’s scoring as a team in the winning effort. Antonio Senzatela got the win to improve to 1-0 after allowing two runs on six hits while striking out three over five innings of work. German Marquez is expected to start game two and is 0-1 with a 1.59 ERA and 6 strikeouts this season. This will be Marquez’s second career start against Oakland.

The Oakland A’s will look to bounce back from their loss in Tuesday’s game one. Mark Canha led the way with two RBIs while Robbie Grossman added an RBI of his own to round out Oakland’s scoring as a team in the losing effort. Ramon Laureano and Matt Olson each put up a pair of hits while Marcus Semien and Matt Chapman each had a base knock as well as none of Oakland’s eight base hits went for extra bases in the loss. Daniel Mengden took the loss, falling to 0-1 after allowing three runs on five hits while striking out four over four innings of work. Frankie Montas is expected to toe the rubber here and is 0-0 with a 2.25 ERA and 5 strikeouts this season. This will be Montas’ second career start against Colorado.

The plus money is tempting when you see how Colorado took game one and Marquez is a better road pitcher than at home, but that’s the case for a lot of Colorado’s pitchers. Montas also had an ERA over six after his lone start against Colorado, but again, that start came at Coors Field. Both pitchers had a solid first outing of the season and I think it carries over into this one as well so I’ll side with the under as my pick for this game.