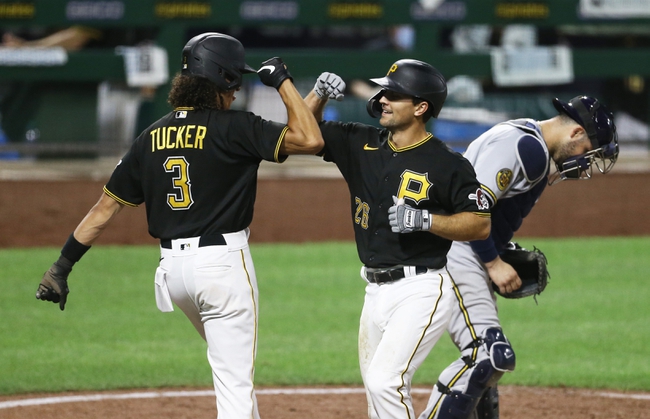 TV: ATPT, FSWI Stream the MLB Game of the Day all season on ESPN+. Sign up now!

The Milwaukee Brewers look for a win here to get back to a .500 record. The Brewers have scored six or more runs now in three of their last four games. The Brewers have won 20 of their last 24 regular season games when scoring more than one run. Lorenzo Cain leads the Brewers with six hits and two RBI while Orlando Arcia and Keston Hiura have combined for nine hits and seven RBI. Brandon Woodruff gets the ball, and he is 0-1 with a 3.60 ERA and five strikeouts this season. Woodruff is 2-1 with a 5.02 ERA and 31 strikeouts in his career against the Pirates.

The Pittsburgh Pirates look for another win to get back to a .500 record. The Pirates have scored 18 runs in their last three games and four or more runs in four of their first five games. The Pirates have won six of their last eight games when scoring at least four runs. Colin Moran leads the Braves with six hits and four RBI while Josh Bell and Phillip Evans have combined for eight hits and three RBI. Joe Musgrove gets the ball, and he is 0-1 with a 4.76 ERA and seven strikeouts this season. Musgrove is 0-1 with a 6.46 ERA and 20 strikeouts in his career against the Brewers.

While the season is still young, the Milwaukee Brewers pitching hasn't been good through five games and it makes you question laying these big prices. Woodruff has been a respectable pitcher up to this point, but the Brewers overall have allowed five or more runs in each of their last three games. The Pittsburgh Pirates are getting production from up and down their lineup and have to be feeling good at the moment. I'll chase the plus money in this spot.