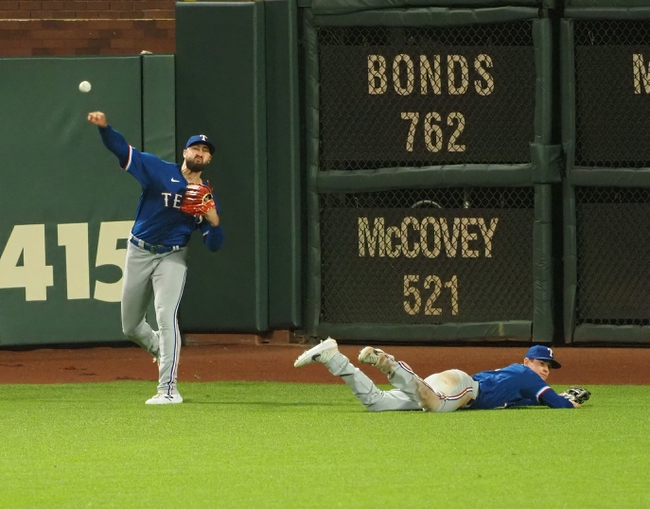 TV: NSBA, FSSW Stream the MLB Game of the Day all season on ESPN+. Sign up now!

The Texas Rangers need a win after losing four of their last five games. The Rangers have scored 10 runs in their last three games and two or less runs in five of their first six games. The Rangers are 1-4 this season when scoring two or less runs. Joey Gallo leads the Rangers with five hits and five RBI while Elvis Andrus and Todd Frazier have combined for eight hits and three RBI. Jordan Lyles gets the ball, and he is 0-0 with a 0.00 ERA and two strikeouts this season. Lyles is 4-3 with a 5.20 ERA and 41 strikeouts in his career against the Giants.

The San Francisco Giants look for a win to get a game above a .500 record. The Giants have scored 23 runs in their last three games and four or more runs in four of their last eight games. The Giants have won three of their last four games when scoring four or more runs. Mike Yastrzemski leads the Giants with 12 hits and three RBI while Donovan Solano and Wilmer Flores have combined for 20 hits and 16 RBI. The San Francisco Giants didn’t list a starting pitcher at the time this article was published.

Jordan Lyles was solid in his season debut, but he only pitched two innings, so it's hard to get a great feel for his game. We do know Lyles was more than hittable last year and had a 4.36 ERA on the road where he walked a batter every two innings. The Texas Rangers are also a team that's lost four of their last five games and can't score runs to save their life. The San Francisco Giants have surprisingly played .500 ball up to this point and are getting some big offensive production from guys you probably wouldn't expect. I'm not sure how long this lasts for the Giants, but it does make them an attractive underdog while it does.

I'll take the San Francisco Giants and the plus money.