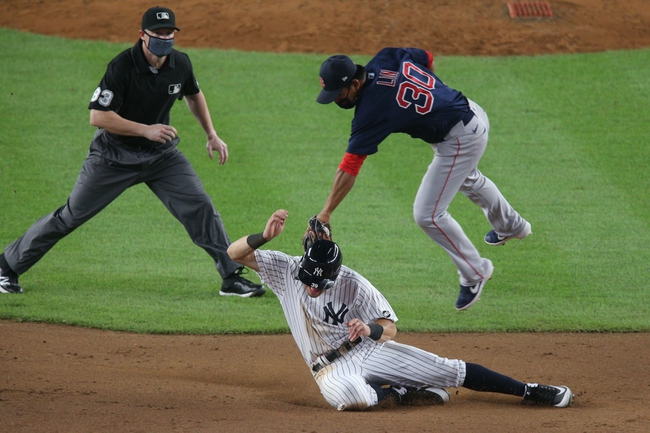 This will be the final matchup in a three-game weekend set between these two AL East teams. The Yankees powered out a 5-1 win on Friday. In the Saturday game, New York made it 2-0 in the series with another victory 5-2. Check back all season long for free MLB picks and MLB predictions at Sports Chat Place.

The Red Sox got into trouble early in the Saturday game and couldn’t dig themselves out of the hole. Zack Godley had a rough start, going just 3.1 innings with six hits, five earned, two walks and a strikeout. After that, the Boston bullpen held strong but the damage was done. Offensively, Kevin Pillar was the only Sox player with more than one hit, going 2-for-4 with a run.

For the Sunday game, Boston will send out Austin Brice as the starter. He will be more of an opener, as this is a planned bullpen game for the Red Sox and technically Brice’s first Major League start despite 110 appearances. In four games so far this year, Brice has a 7.71 ERA with five strikeouts in 4.2 innings.

Over on the Yankees’ side, they essentially won Saturday’s game with one swing of the bat. That came courtesy of Gio Urshela, who slapped a grand slam in the second inning. Aaron Judge also popped a solo homer, and starter Masahiro Tanaka went 2.2 innings with four hits, one earned, one walk and three strikeouts.

For Sunday’s game, New York will be going with James Paxton in the start. Paxton’s first outing of 2020 was rough, and he only recorded three outs in his 41-pitch start versus the Nationals on July 25. That ended up being a 9-2 loss for the Yankees, and Paxton coughed up three runs with five hits.

Pick: I’m going to lean Yankees again here. Granted, New York is going to get pretty thick lines anywhere you look on this game, but they’re still probably the safe choice. Considering Boston is running a bullpen game here, it’s going to be tough for the Sox to navigate that Yankees lineup. I also think Paxton will refocus and find himself. I wouldn’t be surprised to see a quality start and maybe even double-digit strikeouts.