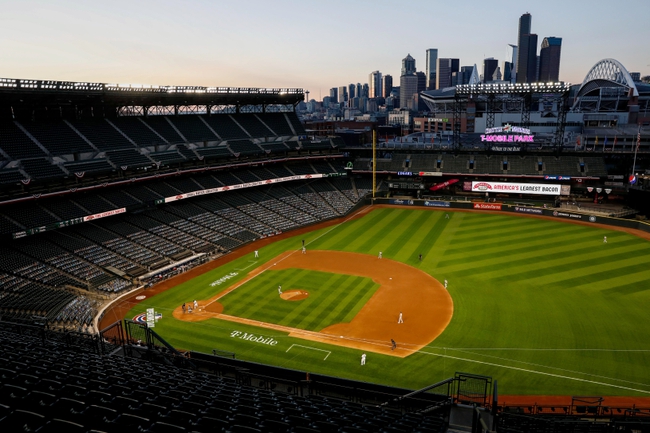 TV: ROOT-Northwest, NBCS-Bay Area Stream the MLB Game of the Day all season on ESPN+. Sign up now!

The Oakland A’s and the Seattle Mariners meet in an AL West division matchup from T-Mobile Park on Sunday afternoon.

The Oakland A’s will look to build on a 3-2 win over the Mariners in Saturday’s matchup. Chad Pinder led the way with a two-run home run while Robbie Grossman had a pinch-hit RBI double to finish off Oakland’s scoring as a team in the win. Stephen Piscotty went 2 for 4 and Mark Canha had a double while Khris Davis added a base hit as well to cap off Oakland’s offense as a team in the victory. Mike Fiers threw six innings, allowing four hits and two earned runs while striking out three, not factoring in the decision. Joakim Soria picked up the win in relief while Liam Hendriks closed things out for his 2nd save. Chris Bassitt will start this one and is 0-0 with a 0.00 ERA and 5 strikeouts this season. In his career, Bassitt is 0-4 with a 4.58 ERA and 20 strikeouts against the Mariners.

The Seattle Mariners will try to rebound after their loss to the A’s on Saturday. Kyle Seager accounted for both Seattle RBIs while Austin Nola went 2 for 4 at the dish. J.P. Crawford and Kyle Lewis each had a base hit as well to finish off Seattle’s offense as the Mariners cranked out just five hits as a team in the losing effort. Yusei Kikuchi threw six shutout innings, allowing three hits while striking out nine, not factoring in the decision. Dan Altavilla took the loss, falling to 1-1 on the year as a result. Kendall Graveman will start here and is 0-1 with a 13.50 ERA and 7 strikeouts this season. This will be Graveman’s first career start against Oakland.

I’m not comfortable backing either team here, as Bassitt’s had no luck in his career against Seattle and Graveman was knocked around in his first start and the Mariners have given up runs like no one’s business this season. Instead of trying to pick a side, give me the over. I can see this one hitting double digits when all is said and done, making that my pick for this game.