TV: SNY, FSFL Stream the MLB Game of the Day all season on ESPN+. Sign up now!

The Miami Marlins and the New York Mets meet in an NL East division matchup from Citi Field on Friday night.

The Miami Marlins will look to keep the ball rolling after an 8-7 win over Baltimore in their last game. Brian Anderson led the way with three RBIs, going 2 for 4 with a triple while Jonathan Villar went 3 for 5 with a homer and two RBIs. Jesus Aguilar and Magneuris Sierra each had an RBI as well in the victory for Miami while Francisco Cervelli and Logan Forsythe each had two hits with a double. Monte Harrison added a base hit as well to cap off Miami’s offense as a team in the win. Jordan Yamamoto allowed four runs on six hits while striking out four, not factoring in the decision after four innings of work in his first start of the year. Mike Morin got the win to improve to 1-0 while Brandon Kintzler closed out the 9th for his 3rd save of the season. Humberto Mejia will start this one and is making his major league debut in this game.

The New York Mets will try to build off of a 3-1 win over the Nationals in their last outing on Wednesday. Dominic Smith led the Mets with two RBIs and a double while Luis Guillorme had an RBI as well to round out the scoring for the Mets as a team in the win. Michael Conforto, Pete Alonso, J.D. Davis, Wilson Ramos and Andres Gimenez all added a base hit as well to finish off Washington’s offense as a team in the winning effort. Rick Porcello got the win after allowing just one earned run on five hits while striking out four over seven innings of work. Seth Lugo closed out the 8th and 9th innings for his 2nd save of the campaign. Michael Wacha will start Friday’s game and is 1-1 with a 6.00 ERA and 9 strikeouts this season. In his career, Wacha is 3-0 with a 3.32 ERA and 19 strikeouts against Miami.

It’s hard when we don't know what to expect from Mejia really, but I’m still going to lean towards the Marlins here. I’m sure Miami’s solid start to the year will turn around and cool off eventually, but until it happens, I’m here for the Fish. New York’s had a tendency to be up and down so far this season and Wacha’s not the same top of the rotation pitcher that he was for years in St. Louis and I think the Marlins keep up their strong play on the way to a win here. 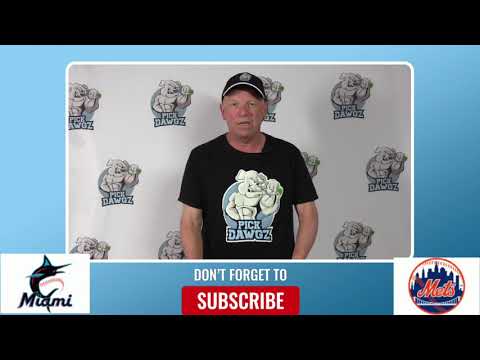