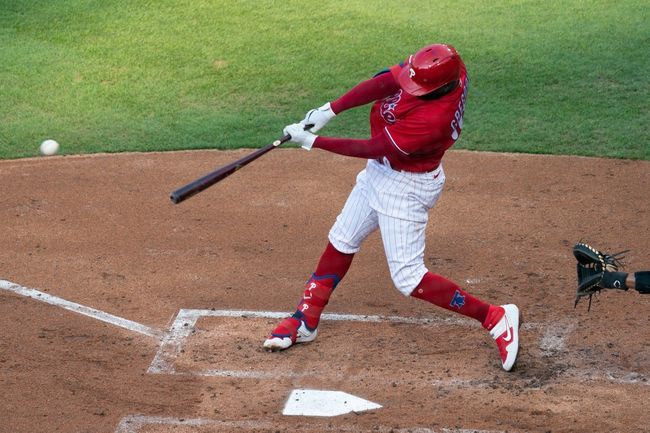 TV: NBCSP, MSN2 Stream the MLB Game of the Day all season on ESPN+. Sign up now!

The Baltimore Orioles and the Philadelphia Phillies meet in the opener of their interleague series from Citizens’ Bank Park on Tuesday night.

The Baltimore Orioles will try to pick up their momentum where they left off after having Sunday’s matchup with the Nationals suspended due to rain, with Baltimore leading the game halted due to rain with Baltimore up 5-2 in the 6th inning. Hanser Alberto and Anthony Santander each had two RBIs while Bryan Holaday had an RBI as well in the Orioles’ 5-run 5th inning with Alberto going 2 for 3 with a double. Dwight Smith Jr., Austin Hays and Chance Sisco each had a base hit as well to finish off Baltimore’s offense as a team in the game. Asher Wojciechowski threw 3.2 innings in the start, not allowing a run while giving up just three hits and striking out four. Alex Cobb will start this one and is 1-1 with a 2.51 ERA and 15 strikeouts this season. This will be Cobb’s second career start against Philadelphia.

The Philadelphia Phillies will try to build off of a 13-8 win over the Braves in their victory on Monday. Didi Gregorius led the way for the Phils with a grand slam while J.T. Realmuto and Bryce Harper each had two hits with a home run and three RBIs. Jean Segura and Roman Quinn each had a solo home run with Quinn going 3 for 4 at the dish with a double as well. Phil Gosselin had two hits while Rhys Hoskins, Andrew Knapp and Scott Kingery each had a base hit to cap off Philly’s offense as a team in the victory. Aaron Nola got the win to improve to 1-1 after giving up just one run on two hits while striking out ten over eight innings of work. Zack Wheeler will start this one and is 2-0 with a 2.08 ERA and 6 strikeouts this season. In his career, Wheeler is 1-0 with a 0.75 ERA and 8 strikeouts against the Orioles.

Normally with an Alex Cobb game, I’d see him starting and bolt the other way. However he’s been serviceable for the Orioles this season and Baltimore’s been a pleasant surprise in that division at 7-7. On the other hand, the Phillies have been disappointing, but it’s been a lack of offense that’s hurt them more often than not and Wheeler has almost half of Philadelphia’s wins in that column this season. I’m going to side with the under in this one as I see Cobb and Wheeler dueling it out here and I think runs will be at a premium in this one.