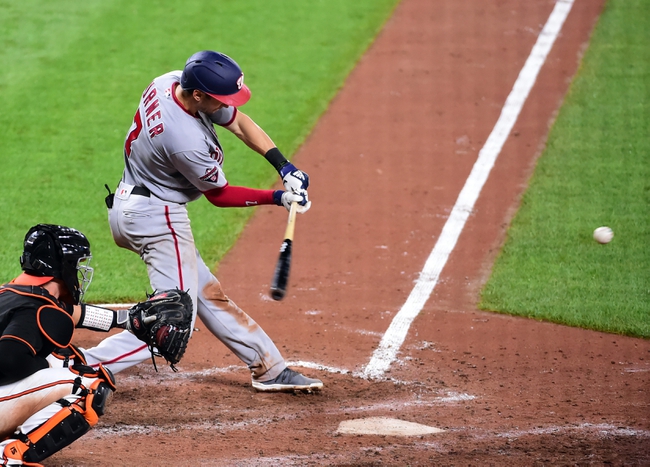 TV: MASN, MSN2 Stream the MLB Game of the Day all season on ESPN+. Sign up now!

The Washington Nationals and the Baltimore Orioles meet in MLB action from Camden Yards on Saturday.

The Washington Nationals will try to build off of a 15-3 win over Baltimore on Friday. Adam Eaton, Asdrubal Cabrera, Juan Soto, Howie Kendrick, Luis Garcia and Yan Gomes all had two RBIs with Cabrera hitting a home run while Gomes went 2 for 5 with a triple and a double. Adam Eaton also had a double as well for the Nationals. Carter Kieboom, Michael A. Taylor and Trea Turner all had RBIs as well to cap off Washington’s scoring while Victor Robles went 2 for 5 with a double and Wilmer Difo added a base hit as well. Erick Fedde got the win to improve to 1-1 on the year after 5.1 innings of two-hit scoreless relief. Patrick Corbin will start here and is 2-0 with a 2.50 ERA and 20 strikeouts this season. In his career, Corbin is 0-1 with a 3.38 ERA and 20 strikeouts against Baltimore.

The Baltimore Orioles will try to rebound after their disappointing showing on Friday. Anthony Santander had a solo home run while Hanser Alberto and Dwight Smith Jr. each had an RBI to round out Baltimore’s scoring as a team in the loss with Alberto adding a double. Andrew Velazquez had a double as well while Jose Iglesias and Austin Hays each chipped in a base knock as the O’s had just six hits as a team in the losing effort. Tommy Milone took the loss after allowing three earned runs on nine hits while striking out a pair over four innings of work. Asher Wojciechowski will start here and is 0-2 with a 3.95 ERA and 15 strikeouts this season. In his career, Wojciechowski is 0-2 with a. 4.05 ERA and 22 strikeouts against Washington.

The plus money is tempting with the Orioles as the better team, but the Orioles also looked like the same sad Baltimore team we’ve come to expect over the last few years in Friday’s loss. Washington needs to start stringing wins together if they’re going to have any hope of trying to defend their World Series crown and this is a more than winnable game for the Nationals to take advantage of. I’ll take my chances with Washington on the run line here.