TV: FS1, FSSW+, FSSD Stream the MLB Game of the Day all season on ESPN+. Sign up now!

The San Diego Padres and the Texas Rangers meet in interleague play in MLB action from Globe Life Field on Monday.

The San Diego Padres will try to rebound from a 5-4 loss to the Arizona Diamondbacks on Sunday. Eric Hosmer had a two-run home run while Josh Naylor added an RBI as well in the loss for San Diego. Tommy Pham and Jake Cronenworth each had a base hit as the Padres cranked out just four hits as a team in the losing effort for San Diego. Garrett Richards allowed two runs on six hits while striking out a pair over seven innings of work, not factoring in the decision. Emilio Pagan ended up with the loss in relief, taking his 3rd blown save of the season as well as a loss to fall to 0-1 this year. Zach Davies will start here and is 2-2 with a 2.78 ERA and 18 strikeouts this season. This will be Davies’ first career start against Texas.

The Texas Rangers will try to bounce back after a 10-6 loss to the Colorado Rockies in Sunday’s series finale. Rougned Odor and Danny Santana each had two RBIs with Odor hitting a two-run home run, while Joey Gallo and Isiah Kiner-Falefa each had an RBI as well to finish off Texas’ scoring as a team in the losing effort. Todd Frazier went 2 for 3 with a pair of doubles and Elvis Andrus had a two-bagger as well to finish off the Texas offense as the Rangers cranked out just six hits as a team in the loss. Kolby Allard took the loss, falling to 0-1 on the year after allowing six runs on eight hits while striking out four over three innings of work. Jordan Lyles will start this one and is 1-1 with a 6.06 ERA and 12 strikeouts this season. In his career, Lyles is 3-4 with a 4.76 ERA and 51 strikeouts against San Diego.

I’m not sure what’s up with the Padres right now as the offense hasn’t been there and when it has, the pitching can’t keep runs off of the board but it’s mostly been the former that’s been San Diego’s problem. Texas had issues in Sunday’s finale but have been playing the better ball overall, it’s just a matter of if Jordan Lyles can keep the runs off of the board in this start. I think Davies comes in and throws a decent game and Lyles did pitch to a 1.54 ERA against these same Padres last year and the roster hasn’t turned over a whole lot, so he knows how to handle them. I’ll side with the under as my free pick for this game, but my stronger play is on the side and I have that available as a premium pick that you can find here. 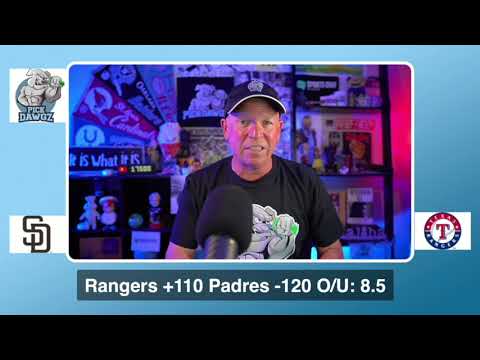