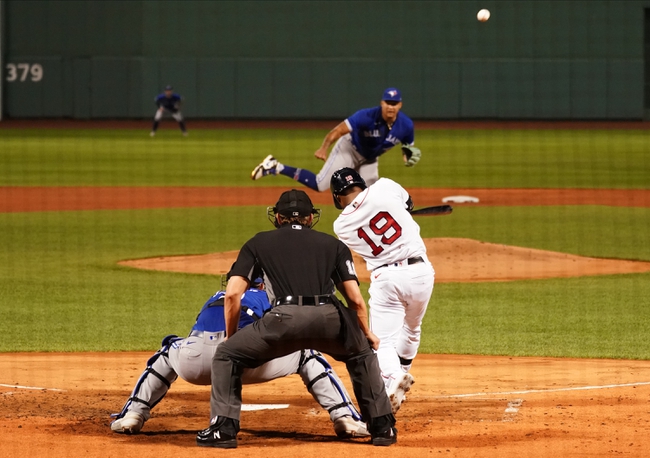 This will be the first game of a doubleheader Friday and the second game in the weekend series between these American League East teams. In the Thursday opener, we had a tight game that went into extra innings. The Blue Jays broke things open with four runs in the tenth inning, and ultimately won 6-2 in epic comeback fashion to take first blood in this rivalry set. Check back all season long for free MLB picks and MLB predictions at Sports Chat Place.

The Blue Jays were down 2-0 heading into the seventh inning on Thursday, but cobbled together a couple of runs to push extra frames. Teoscar Hernandez was the big offensive hitter with a three-run homer and two runs with his two hits. Starting pitcher Taijuan Walker went 5.2 innings with six hits, two earned runs, four strikeouts and one walk.

Over on the Red Sox’ side, starting pitcher Martin Perez went 6.2 innings with three hits, one earned, three walks and five strikeouts in his Thursday outing. JD Martinez led the offense with a 3-for-5 evening, and Jackie Bradley slapped a solo homer in the second inning.

Pick: I’m going Blue Jays here. I’m not really thrilled with either starting pitcher here, but both of them will be needed to eat up some innings here. Godley has been struggling so far, and gave up five runs in 4.2 innings on Sunday against the lowly Nationals. As for Roark, he’s coughed up 15 walks and seven home runs in a 27-inning span, and that’s ballooned his ERA so far. Roark gave up four runs in three innings during a loss to Boston at Fenway on August 7, and he needs a good bounce-back here. I’m thinking this will be a higher-scoring but tight game, and I like Toronto slightly more.