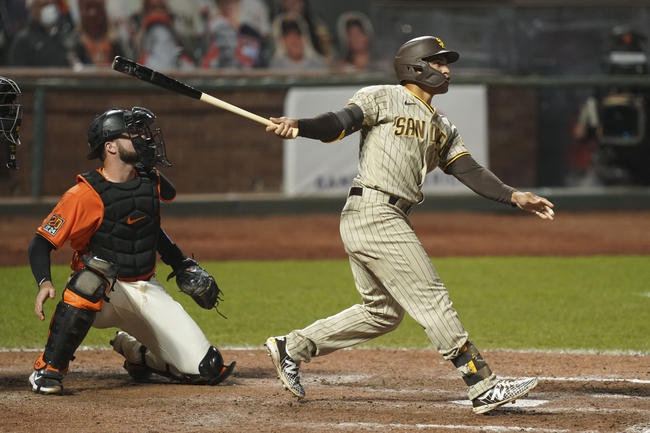 The San Francisco Giants look for a win after splitting their last 12 games. The Giants have scored 14 runs in their last three games and four or more runs in five straight games. The Giants have won six of their last eight games when scoring four or more runs. Donovan Solano leads the Giants with 62 hits and 29 RBI while Mike Yastrzemski and Wilmer Flores have combined for 104 hits and 65 RBI. Johnny Cueto gets the ball, and he is 2-2 with a 5.53 ERA and 52 strikeouts this season. Cueto is 8-5 with a 3.68 ERA and 106 strikeouts in his career against the Padres.

Johnny Cueto has allowed 13 earned runs and 22 hits in his last 15.1 innings, which makes for an ERA well over seven for the month, and he's allowed four or more earned runs in four of his last eight starts. At home this season through 30.1 innings, Johnny Cueto has a 6.82 ERA and .279 allowed batting average. Cueto has allowed 11 earned runs in his last 9.2 innings. While the Padres didn't announce a starting pitcher at the time this article was published, it's hard to get behind Johnny Cueto and these rough numbers. If there was ever a game for the Padres to get out of this funk, this would probably be it.

I'll take a stab with the San Diego Padres in this Saturday night MLB contest.

The pick in this article is the opinion of the writer, not a Sports Chat Place site consensus.
Previous Pick
Los Angeles Dodgers vs. Los Angeles Angels MLB Picks, Odds and Prediction 9/26/20
Next Pick
Kansas City Royals vs. Detroit Tigers - 9/27/20 MLB Pick, Odds, and Prediction