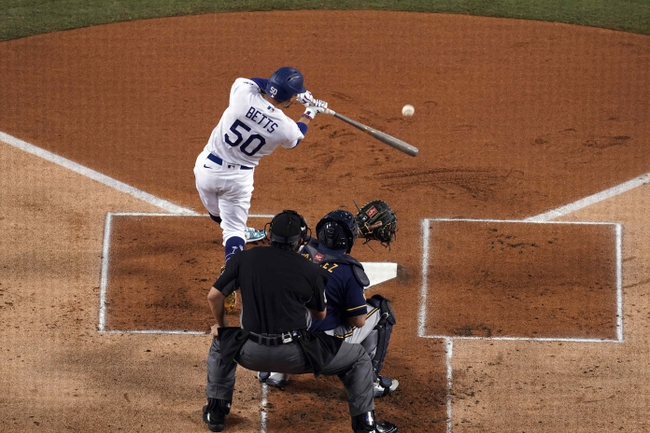 This will be Game 2 in a best-of-three series between the Brewers and the Dodgers this week. In the Game 1 opener on Wednesday, the Dodgers jumped out to a 3-0 lead after two innings and hung on for a 4-2 victory. Check back all season long for free MLB picks and MLB predictions at Sports Chat Place.

The Brewers out-hit the Dodgers 7-6 in the Game 1 loss Wednesday, but could only score two runs in the top of the fourth inning. Orlando Arcia posted a two-run homer in the defeat, and Avisail Garcia went 3-for-4. Starting pitcher Brent Suter went just 1.2 innings with three hits, three earned and five walks.
In the Thursday starting role, the Brewers are going with Brandon Woodruff. In his 13 starts this season, Woodruff went 3-5 with a 3.05 ERA and 91 Ks in 73.2 innings of work. Over his MLB postseason career, Woodruff is 1-1 with a 2.20 ERA and 23 Ks in 16.1 innings.

Over on the Dodgers’ side, Wednesday starting pitcher Walker Buehler went 4.0 innings with three hits, two earned, two walks and eight strikeouts in a no-decision. Corey Seager managed a solo home run in the win, and Mookie Betts logged two doubles.
In the Thursday start, Los Angeles will send Clayton Kershaw out to the mound. In 10 starts this season, Kershaw was 6-2 with a 2.16 ERA and 62 Ks in 58.1 innings. Kershaw is 9-11 in his MLB playoffs career with a 4.43 ERA and 170 Ks in 158.1 innings.

Pick: I’m going to take a shot on Milwaukee here. Kershaw should have a pretty strong outing as usual, even though he’s coming off a shaky four innings versus the Angels in his last appearance. Kershaw has had its issues in the playoffs, but he should be fine in this one. As for Woodruff, he struck out 10 in eight scoreless innings his last time up, and if he can recapture that fire in Game 2 I think the Brewers are worth an underdog play.