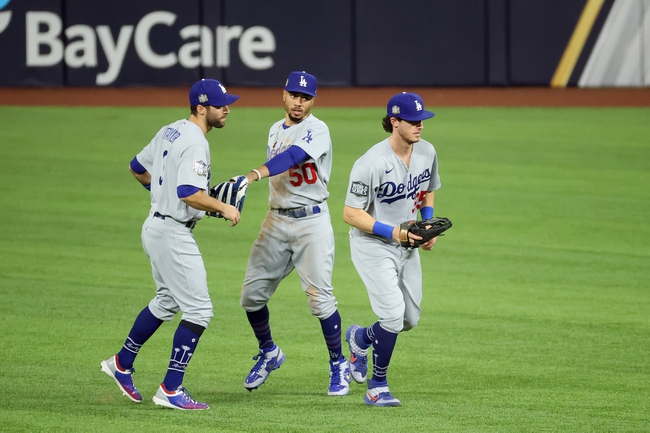 The Tampa Bay Rays need a victory here to even up the series at 2-2. The Tampa Bay Rays offense managed just two runs in their game three loss, and they’ve now been held to three or less runs in four of their last seven games. We know about the Rays bullpen and their solid starting pitching staff, but it’s going to be hard to bring home a World Series title if the bats don’t start to heat up. Randy Arozarena leads the Rays with 23 hits and 11 RBI while Manuel Margot and Joey Wendle have combined for 25 hits and 16 RBI. The Tampa Bay Rays didn’t announce a starting pitcher at the time this article was published.

The Los Angeles Dodgers look for another victory to take a commanding 3-1 series lead. The Los Angeles Dodgers offense continues to produce, as they scored six runs in their game three victory and have now scored a combined 18 runs in this series. The Dodgers are now 11-2 this postseason when scoring at least three runs. Mookie Betts leads the Dodgers with 18 hits and seven RBI while Corey Seager and Cody Bellinger have combined for 30 hits and 28 RBI. Julio Urias gets the ball for the Dodgers, and he is 6-2 with a 2.84 ERA and 26 strikeouts in his postseason career.

The Tampa Bay Rays are a really good baseball team and you can't count them out just yet. However, the offensive struggles for the Rays is becoming a trend and that's not going to fly against a team like the Dodgers. I don't care how good the Rays pitching staff is, they're not going to win this series if they can't put crooked numbers on the board. Urias has also been money in the postseason, allowing one earned run and seven hits in 16 innings. Urias has allowed four earned runs in his last 27.2 innings overall. There's too much leaning in the Dodgers favor right now.

I expect the Dodgers to take a 3-1 series lead.