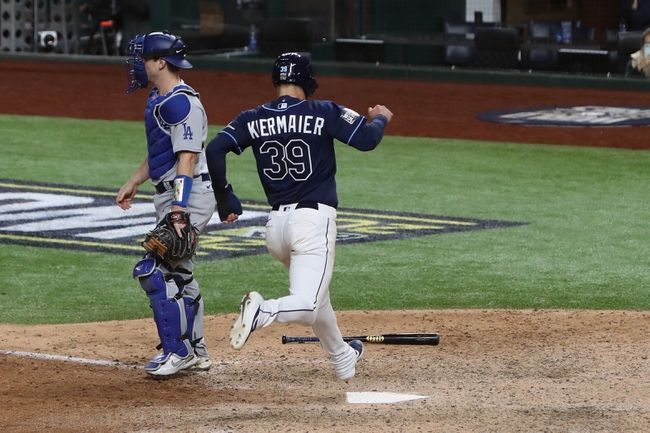 In this championship matchup thus far, the Dodgers managed to win Game 1 8-3, but Tampa Bay evened it up with a 6-4 win during Game 2. In Friday’s Game 3 the Dodgers retook the series lead with a 6-2 win. In the Saturday Game 4, we had a World Series record eight straight half-innings with a run scored and Tampa Bay posted a walk-off win 8-7. Check back all season long for free MLB picks at Sports Chat Place.

The Dodgers had a 7-6 lead going into the bottom of the ninth inning and out-hit Tampa Bay 15-10 on Saturday, but still couldn’t come away with the Game 4 victory. Corey Seager and Justin Turner combined for eight hits with five runs and three RBI in the defeat. Starting pitcher Julio Urias went 4.2 innings with four hits, two earned, one walk and nine strikeouts.

PICK: I feel like the Dodgers are still the safer play here. Kershaw was used relatively sparingly in Game 1 and was effective on one run in six innings. As for Glasnow, he’s coming off an uncharacteristic performance in the Game 1 loss, giving up six walks and six runs over a tepid 4.1 innings. I like Glasnow to bounce back and have a better outing here, but I also like Kershaw to win the duel and put Los Angeles in position for a key Game 5 victory. Should be a tight, tense, lower-scoring game and a fun matchup to watch.