The Baltimore Orioles come into the 2021 campaign looking to shake off a frustrating 2020 season that saw the O’s finish the abbreviated 60-game season with a record of 25-35, their fourth straight losing season but first season since their last trip to the playoffs in 2015, that Baltimore didn’t finish dead last in the AL East. The Orioles parted ways with a couple of their best players in Hanser Alberto, Renato Nunez and Jose Iglesias, but that’s to be expected when you’re stripping everything down in a rebuild like the Orioles have been doing for some time. The Orioles still have some solid pieces like Anthony Santander who had 11 home runs and 32 RBIs with a .261 batting average last season while Ryan Mountcastle was solid in his debut foray with the big team, hitting for a .333 BA in 35 games. The two things to watch this season will be the return of Trey Mancini which is a welcome sight after dealing with cancer treatment in 2020, missing the season, and the incoming debut of Adley Rutschman who will likely be the cornerstone behind home plate Baltimore for years to come. The 1st overall pick in 2019 is known for having an accurate gun of an arm behind home plate and has solid plate skills as a switch-hitting catcher. John Means was arguably the ace of Baltimore’s rotation last year and will make the start on opening day after going 2-4 with a 4.53 ERA and 42 strikeouts last season. In his career, Means is 3-2 with a 4.46 ERA and 21 strikeouts against Boston.

The Boston Red Sox come into the 2021 season looking to shake off one of the worst seasons in franchise history, finishing the abbreviated 2020 season with a record of 24-36, and the .400 win percentage was the Red Sox’ worst percentage to finish a season since 1965 and Boston’s first last-place finish since 2015. Alex Cora is back on the bench for the Red Sox after his suspension for his involvement in the Houston Astros sign-stealing scandal, and the Red Sox still have a decent battling lineup, flanked with Alex Verdugo batting leadoff along with Xander Bogaerts, Rafael Devers, J.D. Martinez, Christian Vazquez and Enrique Hernandez littered throughout the lineup. The pitching rotation is the bugaboo for the Red Sox as there’s a drop-off early on from Eduardo Rodriguez to the likes of Nathan Eovaldi and Martin Perez, but the pending return of Chris Sale is sure to lift spirits up in Beantown. Speaking of Eovaldi, he’s expected to get the nod on opening day after going 4-2 with a 3.72 ERA and 52 strikeouts in 2020. In his career, Eovaldi is 6-1 with a 4.15 ERA and 54 strikeouts against Baltimore.

I get that Eovaldi has great numbers against the O’s in his career, but something still feels wrong that he’s this big of a favorite even with the Red Sox lineup behind him and the O’s in a rebuild. Baltimore had the most success behind John Means last season, and he may be one of the few bright spots of this Orioles team this year. It’s opening day, anything can happen and passing up this kind of plus money is not something I feel like doing. 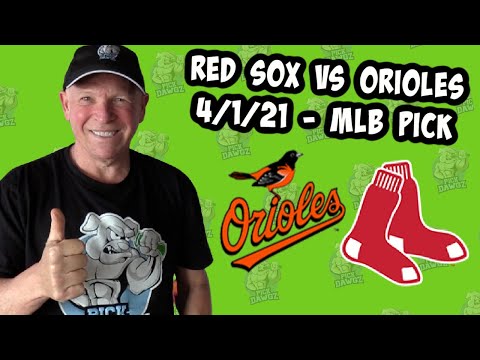