This game has been postponed. The New York Mets and the Washington Nationals meet in an NL East division clash in MLB Opening Day action from Nationals Park.

The New York Mets come into the 2021 season looking to shake off another disappointing season in the Big Apple, finishing the year with a 26-34 record in the condensed 60-game slate and missing out on the playoffs for the 4th straight year. The Mets were some of the busiest teams in the offseason in terms of bringing in new and fresh talent to finally live up to lofty expectations, bringing in Carlos Carrasco and Francisco Lindor via trade in January as well as inking utility pieces like Jonathan Villar and Kevin Pillar to free agent deals as well. The Mets still have a strong batting lineup, anchored with such talents like Pete Alonso, the aforementioned Lindor, Jeff McNeil, Michael Conforto and Brandon Nimmo. The pitching rotation is also looking solid, led by perennial ERA master Jacob deGrom with the Mets also bringing in Joey Lucchesi to suit up alongside Marcus Stroman and Taijuan Walker with the return of Noah Syndergaard, Carrasco and Seth Lugo all looming after approximately the first month of the season. Speaking of deGrom, he’s expected to start on opening day and was 4-2 with a 2.38 ERA and 104 strikeouts last season. In his career, deGrom is 8-4 with a 2.61 GAA and 160 strikeouts against Washington.

The Washington Nationals were unable to defend their World Series title in 2020 after following up a successful 2019 with a 26-34 overall record, tied for 3rd in the NL East and Washington’s first losing season since 2011. There was a tremendous amount of turnover from last year heading into this year, as the Nats parted ways with names like Adam Eaton, Anibal Sanchez, Kurt Suzuki, Ryan Zimmerman, Asdrubal Cabrera and Brock Holt, but Zimmerman re-signed in January and Josh Harrison re-signed with the Nationals as well. The Nats brought in some veteran experience from the Windy City as Jon Lester and Kyle Schwarber both come in from the Chicago Cubs via free agency and Brad Hand from the Padres via free agency as well.  It’s still business as usual for the Nats in the starting rotation as Patrick Corbin, Max Scherzer and Stephen Strasburg anchor the lead spots with Joe Ross and the aforementioned Lester in the mix with guys like Austin Voth and Erick Fedde each getting their turn in the starting role as well. Scherzer is expected to get the start here and was 5-4 with a 3.74 ERA and 92 strikeouts last season. In his career, Scherzer is 12-5 with a 2.70 ERA against the Mets.

Nine times out of ten, I’ll give strong consideration to Max Scherzer as a home dog, and opening day you’d have to think everyone is pumped up for. However, there’s been a lot of turnover with Washington’s lineup, and Scherzer was injured a lot last year and you’d have to think that the Nationals are going to keep a very, very close eye on Scherzer and they won’t hesitate to pull him out at the first opportunity. The Mets had a lot of turnover as well, but it was mostly positive and the addition of Lindor vaults the Mets into the conversation already, but how many times have we said that before. It’s only the first game of the season, but I think the Mets draw first blood here behind deGrom. 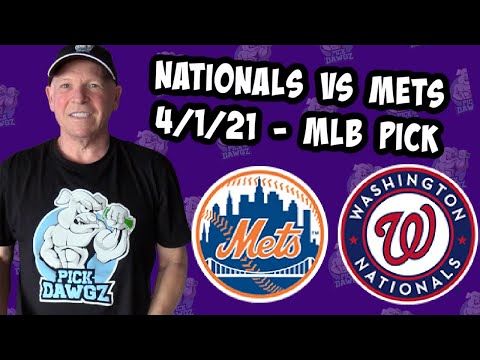