The Tampa Bay Rays and the Miami Marlins meet Friday in MLB action from Marlins Park.

This will be game two of a three-game weekend set between these teams. In Thursday’s opener we had a low-scoring battle as the Rays eventually eked out a 1-0 win. Check back all season long for free MLB picks at Sports Chat Place.

Tampa Bay could only notch five hits in the Thursday opener, but that was good enough for the 1-0 victory. Austin Meadows was responsible for the lone RBI on a solo homer. Brandon Lowe had the only other extra-base hit with a double on a 1-for-3 afternoon.

For the Friday game two matchup, the Rays will be sending out Ryan Yarbrough in the starting role. Last season over 11 games (nine starts), Yarbrough posted a 3.56 ERA with a 1.19 WHIP in 55.23 innings. Tampa Bay will look to transition Yarbrough into a full-time starter this season.

Over on the Miami side, they couldn’t get the bats going on Thursday either, accounting for just three hits in the loss. Jesus Aguilar provided two of those hits in a 2-for-4 effort, and Jorge Alfaro had the other single.

PICK: I’m going to stick with the Rays here, but it should be a solid starting pitcher matchup. Lopez had a pretty solid spring training run, posting a 2.63 ERA with nine strikeouts over 13.2 innings of work in four games. As for Yarbrough, he may need to build up a little endurance in the early-going this year, but his tendency to generate soft contact should serve the Rays well. I like another tight, lower-scoring game until the late innings in this one. 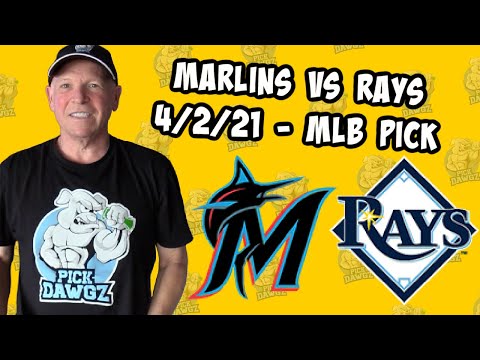