This will be the Mets’ first game of the season. New York’s series versus the Nationals was postponed due to positive virus tests. As for the Phillies, they played the Braves this past weekend. Philly took the first two games 3-2 and 4-0, then on Sunday the Phillies kept it going with a one-run win. Check back all season long for free MLB picks at Sports Chat Place.

New York was originally going to have a three-game series versus Washington this past weekend, but were forced to postpone those matchups. The Mets will be eager to get back to the field and try to improve on their disappointing 26-34 run in 2020 for a fifth-place division finish.

New York will roll with Jacob deGrom in the Monday season opener. This will be deGrom’s third straight Opening Day start, which matches Johan Santana for the third-longest in franchise history. Last year deGrom posted a 2.38 ERA with a 4-2 record and 104 strikeouts in 12 games.

Over on the Phillies’ side, they were able to handle the Braves 3-2 on Thursday and 4-0 on Saturday. In the Sunday game, we had another tight affair but Philly was able to pull out a 2-1 win. Starter Zach Eflin went 7.0 innings there with four hits, one earned and eight Ks.

For the Monday starting pitcher role, the Phillies will go with Matt Moore. It’s been a while since we’ve seen Moore in the Major Leagues; he was pitching in Japan last year and hasn’t started in the MLB since April of 2019. Moore is coming off a solid spring and the Phillies have high hopes for him.

PICK: I’m going to take a stab on the Mets here. New York’s best chance to win this season will be with deGrom on the mound, and if he continues to pitch well the Mets will pull out a lot of games they otherwise may have lost. It will be interesting to see what Moore can do in this matchup, but all things considered I’m going to stick with deGrom and the gang. 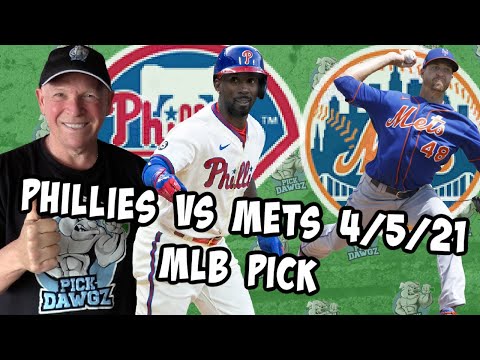