The Milwaukee Brewers and the St. Louis Cardinals meet in an NL Central division clash in MLB action from Busch Stadium on Thursday night.

The Milwaukee Brewers will be out to build on a 4-2 win over the Cubs in extra innings last time out. Lorenzo Cain led the way with a pair of home runs, accounting for all four of Milwaukee’s RBIs in the win while Christian Yelich went 3 for 4 with a double. Avisail Garcia, Daniel Vogelbach and Daniel Robertson all had base hits as well in the victory for the Brew Crew. Brandon Woodruff threw seven one-hit shutout innings, striking out eight, but not factoring in the decision. Josh Hader got the win to improve to 2-0 while Brad Boxberger closed the deal for the save. Corbin Burnes will start here and is 0-1 with a 1.42 ERA and 11 strikeouts this season. In his career, Burnes is 1-2 with a 6.41 ERA and 33 strikeouts against St. Louis.

The St. Louis Cardinals will look to build on a dominant 7-0 win over Miami last time out. Dylan Carlson led the charge with a 9th inning grand slam while Yadier Molina had a two-run home run in the 7th inning. Paul Goldschmidt added an RBI to round out St. Louis’ scoring as a team in the winning effort while Tommy Edman went 3 for 5 at the dish and Nolan Arenado and Justin Williams each had a base hit to cap off the Cardinals’ offense in the victory. Jack Flaherty got the win to pick up his first W of the season after tossing six oe-hit shutout innings, striking out six on the way to the victory. Adam Wainwright will start here and is 0-1 with a 20.25 ERA and 1 strikeout this season. In his career, Wainwright is 18-11 with a 2.50 ERA and 230 strikeouts against Milwaukee.

I get the case that could be made for either side here as the Brewers have Corbin Burnes going who threw a gem in the opener, while St. Louis has Wainwright going but the Cards have played well as a whole early on this season. This game means a lot to the Brewers as a team and potentially a lot to Wainwright as he’s running out of opportunities for new contracts, so I’lm going side with the under as I’m expecting a duel here. 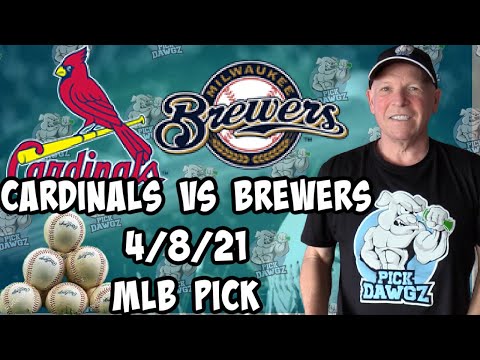