TV: ATT SportsNet-PIT, Marquee Sports Network Stream the MLB Game of the Day all season on ESPN+. Sign up now!

The Chicago Cubs and the Pittsburgh Pirates meet in an NL Central division matchup in MLB action from PNC Park on Saturday.

The Chicago Cubs will look to build on their 4-2 win over the Pirates in their last matchup. All of Chicago’s scoring came via the longball, as Javier Baez cranked a two-run shot for the Cubs while Anthony Rizzo and Kris Bryant each had solo homers to make up the difference in the scoring for the Cubs in the victory. Jake Marisnick added a pair of hits while Willson Contreras, Joc Pederson and Jason Heyward each had base hits as well in the victory. Jake Arrieta got the win to improve to 2-0 after giving up two runs on seven hits while striking out four over six innings of work, not factoring in the decision. Craig Kimbrel closed out the 9th for his 2nd save of the season. Zach Davies will start here and is 1-0 with a 3.18 ERA and 5 strikeouts this season. In his career, Davies is 5-5 with a 4.34 ERA and 48 strikeouts against Pittsburgh.

The Pittsburgh Pirates will look to rebound from their loss to the Cubs in their last matchup. Adam Frazier went 2 for 4 with an RBI and despite going 0-fer at the dish, Dexter Fowler added an RBI as well to make up the scoring for the Pirates in the losing effort. Gregory Polanco went 2 for 3 with a double and Colin Moran had a double as well while Kevin Newman and Jacob Stallings each had a base hit as well as the Pirates cranked out just seven hits as a team in the losing effort. Tyler Anderson took the loss, falling to 0-2 after allowing three runs on ten hits with five strikeouts over 5.1 innings of work. Mitch Keller will start here and is 0-1 with a 9.00 ERA and 4 strikeouts this season. In his career, Keller is 0-3 with a 7.20 ERA and 17 strikeouts against the Cubs.

I get the case that could be made for either side here, as the Cubs are the better team but aren’t a team that’s easy to stomach laying juice with on the road. Instead, I’m going to side with the over. Davies has had issues with the Pirates in the past, and although he beat them in the first meeting, he still has a 4.34 career ERA against the Pirates. On the other hand, Mitch Keller hasn’t been spectacular and he has a 7.20 ERA in his career against the Cubbies so I think the over is a smart play here. 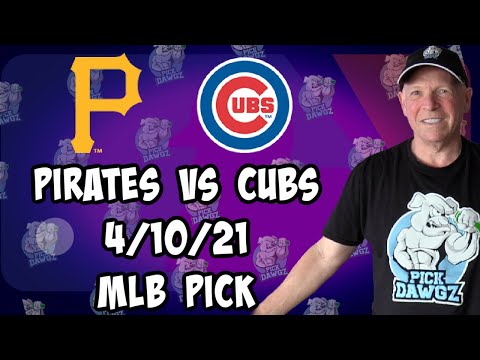