The Colorado Rockies and the Los Angeles Dodgers meet in an NL West division matchup in MLB action from Dodger Stadium on Wednesday night.

The Colorado Rockies will look to bounce back from a 7-0 defeat at the hands of the Dodgers on Tuesday night. Garrett Hampson had a pair of hits, going 2 for 4 at the dish, as the lone Rockies bat to reach base with a hit as the Rockies only had the two hits while the rest of the team went 0 for 24 with 2 walks and 11 strikeouts. Antonio Senzatela took the loss, falling to 1-2 after allowing four earned runs on five hits while striking out a pair over 2.2 innings of work. Jon Graysons will start here and is 1-0 with a 1.54 ERA and 12 strikeouts this season. in his career, Colorado is 5-6 with a 4.45 ERA and 84 strikeouts against the Dodgers.
The Los Angeles Dodgers will look to build on Tuesday’s convincing win over the Rockies with another strong showing here. Max Muncy led the way, going 2 for 3 with a home run and two RBIs while Corey Seager went 2 for 3 with a solo homer and a double as well. Chris Taylor and Mookie Betts each had solo bombs as well and Gavin Lux added an RBI while Edwin Rios and even Trevor Bauer each had base hits to cap off L.A.’s offence as a team in the winning effort. Bauer got the win on the mound as well to improve to 2-0 after tossing seven shutout innings, allowing just one hit while striking out nine on the way to the win. Dustin May will start here and is 1-0 with a 0.00 ERA and 8 strikeouts this season. in his career, May is 0-0 with a 2.31 ERA and 7 strikeouts against Colorado.
Colorado is 22-49 in their last 71 road games and 17-36 in their last 53 games overall while the under is 5-0 in their last 5 division games. Los Angeles is 53-17 in their last 70 games overall and 40-14 in their last 54 division games while the under is 4-1 in their last 5 games as a favorite. Colorado is 14-38 in the last 52 meetings between these two teams.
I get the case that could be made both ways here, as Jon Gray has been arguably Colorado’s best chance to beat the Dodgers on the mound in recent meetings and Dustin May isn’t a guy I associate with heavy prices like this. On the other side, the Dodgers are heads and shoulders the better team in better form. With that said, it’s a steep price, so I’ll back the Dodgers on the -1.5 run line as I’ve seen nothing from the Rockies to suggest we would see anything different from them in Wednesday’s matchup. 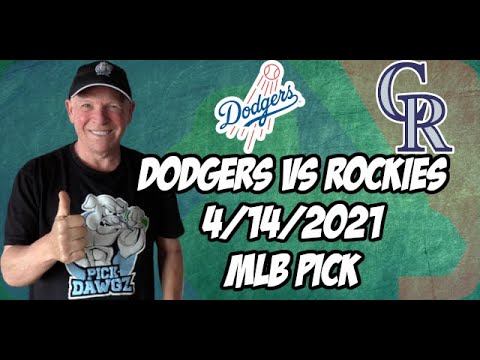