The San Diego Padres and the Pittsburgh Pirates meet in MLB action from PNC Park on Thursday.

The San Diego Padres will look to bounce back from their 5-1 loss to the Pirates on Wednesday. Tommy Pham accounted for the lone San Diego RBI in the losing effort while Eric Hosmer had a double and Ha-Seong Kim went 2 for 3 at the dish. Jurickson Profar and starting pitcher Joe Musgrove each had a base hit as well as the Padres mustered up just six hits as a team in the losing effort. Musgrove took the loss on the mound after allowing one run on four hits while striking out six over four innings of work. Chris Paddack will start here and is 0-1 with a 5.63 ERA and 6 strikeouts this season. This will be Paddack’s second career start against Pittsburgh.

The Pittsburgh Pirates will be out to build on their win over the Padres from Wednesday. Gregory Polanco had a solo home run while Adam Frazier went 3 for 5 with a pair of doubles and two RBIs. Colin Moran and Erik Gonzalez each had RBIs as well to round out the scoring for the Pirates in the winning effort while Dustin Fowler and Bryan Reynolds each had a base hit as well to cap off the offense for Pittsburgh in the win. Tyler Anderson got the win to improve to 1-2 on the year after allowing one run on four hits with a pair of strikeouts over 5.1 innings of work. Mitch Keller will start here and is 1-1 with a 4.50 ERA and 11 strikeouts this season. This will be Keller’s first career start against San Diego.

I get why the Padres are favored here as they’re the better team on paper. However, Pittsburgh’s come alive in this series for whatever reason and every time I back Chris Paddack, he seems to get shelled and hasn’t been showing signs of the pitched we thought he was going to be last season up until now. Mitch Keller isn’t a world-beater by any means, but with how the first couple games of this series has shaken out, you have to give a look to Pittsburgh and the plus money here. 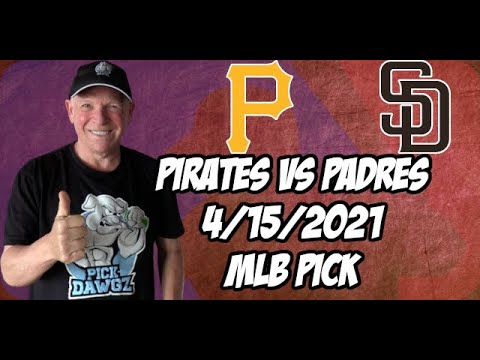