The Arizona Diamondbacks and the Washington Nationals meet Friday in MLB action from Nationals Park.

This will be the second installment of a four-game set between these teams this week. In the series opener on Thursday, Arizona notched a big five-run win. Check back all season long for free MLB picks at Sports Chat Place.

Arizona played a couple of games versus the A’s this week, losing both outings 9-5 and 7-5. In the Thursday game one opener versus the Nats, Arizona didn’t waste any time, jumping out to a 10-4 lead after two innings. Starter Merrill Kelly hung in there for 6.0 innings, nine hits and six earned.

For the game two start Friday, the Diamondbacks will go with Taylor Widener. Over two starts so far this year, Widener has a 2.45 ERA with 10 hits, four runs (three earned), one homer, three walks and eight Ks in 11.0 total innings of work.

Over on the Nationals’ side, they managed a 2-1 mark in a three-game set versus the Cardinals this week, winning Monday and Wednesday. In the Thursday game Washington took the lead back in the first inning but lost it by coughing up seven runs in the second. Patrick Corbin was tagged with 2.0 innings and nine earned.

For Friday’s game two start, the Nationals will go with Max Scherzer. Over two starts so far this year, Scherzer has a 3.75 ERA with 12.0 innings, eight hits, five earned runs, four homers, one walk and 14 strikeouts.

PICK: I’m going to stick with the Nationals. Scherzer has pitched well this year outside of a shaky first start April 6 versus the Braves (five hits; four solo homers) and historically has done well versus his former team. In nine starts versus the Diamondbacks, Scherzer is 7-0 with a nice 2.85 ERA. If Scherzer can keep that up and avoid the long-ball, the Nats should be in good shape. 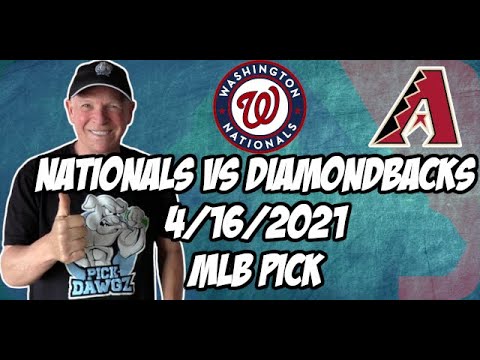