This will be the last installment of a three-game set between these teams over the weekend. The White Sox managed a win on Friday, then in the Saturday game Chicago did it again with a tense one-run victory. Check back all season long for free MLB picks at Sports Chat Place.

Texas gave up five runs in the third inning during the Friday game and couldn’t keep the pace in an eventual 9-7 loss. In the Saturday matchup, The Rangers managed just one run on 11 hits in a tough 2-1 defeat. Starter Kyle Gibson put up 6.0 innings with six hits, one earned, two walks and five Ks.
For Sunday’s game three, the Rangers will send out Kohei Arihara. In his three games so far, Arihara has 20.1 innings with 16 hits, six runs (five earned), one homer, three walks, 13 strikeouts and a 2.21 ERA. He hasn’t given up a run in his last 11.1 innings.

Over on the White Sox’ side, they posted a whopping 16 hits in the Friday game but still had to hang on for the victory. On Saturday, it was another close game and another great win. Starter Dallas Keuchel put up 6.0 innings with six hits and two strikeouts.

For the Sunday game, the White Sox will send out Lucas Giolito in the start. Over his three outings so far, Giolito has 18.2 innings with 17 hits, 13 runs (12 earned), three homers allowed, seven walks, 26 strikeouts and a 5.79 ERA.

PICK: I’m going to stick with the Rangers. Giolito is coming off a bad start on April 19 versus the Red Sox, going just one inning with eight hits, eight runs (seven earned), two homers allowed and a pair of walks. Conversely Arihara has been great in his last pair, combining for 11.1 innings, five hits, no earned, two walks and 11 strikeouts. I like a better performance from Giolito here, but also a Rangers victory. 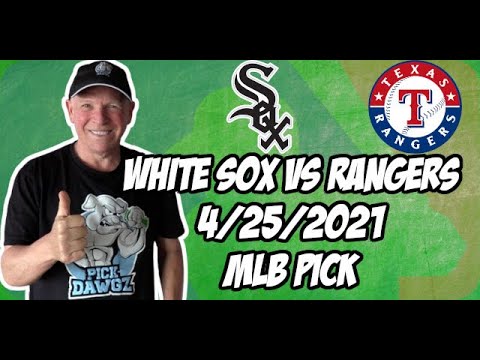