The New York Yankees and the Baltimore Orioles meet Monday in MLB action from Oriole Park.

The Yankees are coming off a weekend series versus the Indians. After winning the first three games, on Sunday New York fell by four runs. As for the Orioles, they played the A’s over the weekend. Baltimore lost the first two, then on Sunday stopped the sweep with a big victory. Check back all season long for free MLB picks at Sports Chat Place.

New York managed to take out the Indians 6-3 on Thursday, 5-3 on Friday and 2-1 on Saturday. In the Sunday series finale, the Yankees jumped out to a 3-0 lead but gave it right back in an eventual 7-3 loss. Starter Jameson Taillon put up 4.0 innings with five hits and four earned runs in the defeat.

For the Monday game, the Yankees will send out Deivi Garcia in the start. This will be Garcia’s season debut; he’s been recalled from the alternate training site. Look for Garcia to try and work on his slider in this start.

Over on the Orioles’ side, they had some troubles with the A’s over the weekend. Baltimore lost 3-1 Friday and 7-2 Saturday. On Sunday, the O’s plated five runs in the eighth inning and got a win 8-1. Austin Hays finished with two hits, three runs and three RBI.

For the Monday starting pitcher role, the Orioles are going with Matt Harvey. This year so far, Harvey has 19.1 innings with 24 hits, 11 earned, two homers allowed, three walks, 16 strikeouts, a 1-1 record and a 5.12 ERA overall.

PICK: I’m going to take a stab on the Orioles here. New York showed some signs of life in the Indians series, but struggled in the Sunday game on both sides of the ball. The Yankees have scored a relatively paltry five runs over the last two games, and if they’re not hitting home runs they haven’t been a good offense. If Harvey can keep the ball in the park the O’s have a shot in this one. 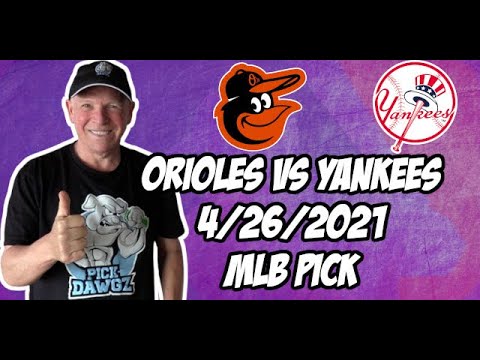