The Angels are coming off a weekend set versus Houston. Los Angeles lost the first three games, then on Sunday the Angels stopped the sweep with a two-run win. As for the Rangers, they played the White Sox this weekend. Texas lost the first pair, and in the Sunday game the Rangers fell again. Check back all season long for free MLB picks at Sports Chat Place.

Los Angeles had some issues with the Astros this weekend, losing 8-2 Thursday, 5-4 Friday and 16-2 Saturday. In the Sunday finale, the Angels finally got a W with a 4-2 result. Starter Dylan Bundy put up 6.0 innings with three hits and two earned in that one.

For the starting pitcher role on Monday, the Angels will send out Shohei Ohtani. So far this year across 8.2 innings, Ohtani has three hits, three runs (one earned), 11 walks, 14 strikeouts and a 1.04 ERA. This will be Ohtani’s first start on the road this season.

Over on the Rangers’ side, they lost their series versus the White Sox this weekend. After losses 9-7 on Friday and 2-1 on Saturday, in the Sunday game Texas fell again 8-4. Kohei Arihara managed to go just 2.0 innings with six hits, five earned and four walks.

For the Monday starting pitcher role, the Rangers are sending out Jordan Lyles. Over his four starts so far, Lyles has 21.1 innings with 21 hits, 11 earned runs, five homers allowed, three walks, 18 strikeouts and a 4.64 ERA.

PICK: I’m going to take the Angels here. Lyles has been one of the better starters for the Rangers in the early-going, but he’s also given up at least one homer and five hits in each outing so far. If Ohtani comes in on point (he may even hit in this one as well) he should be able to keep LA in the game. Should be an interesting game. 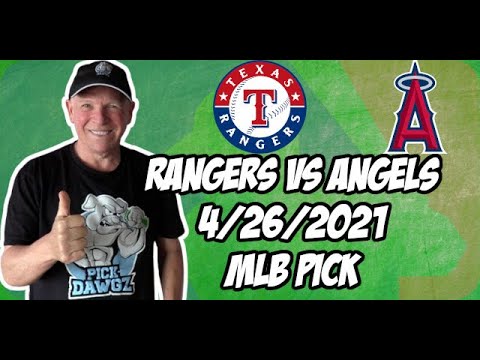