The Chicago Cubs and the Atlanta Braves meet Tuesday in MLB action from SunTrust Park.

This will be the second installment in a four-game set between these teams this week. In the Monday opener, the Braves eked out a one-run victory. Check back all season long for free MLB picks at Sports Chat Place.

Chicago played the Brewers over the weekend, posting a big 15-2 win Friday before a pair of losses 4-3 Saturday and 6-0 Sunday. In the Monday opener, the Cubs coughed up four runs in the first inning and ultimately fell in a tough one 8-7. Starter Zach Davies put up just 3.2 innings with five earned.
For the Tuesday game, the Cubs will be sending out Trevor Williams. In his four outings and 19.1 innings of work so far, Williams has 21 hits, 10 earned runs, one homer allowed, eight walks, 19 strikeouts and a 4.66 ERA.

Over on the Braves’ side, they managed a win over the Diamondbacks on Friday but lost their other two weekend games 5-0 and 7-0. In the Monday game, Atlanta gave up their 4-0 lead with three Cubs runs in the third, but were able to make it back up. Charlie Morton put up 5.1 innings with five earned and six Ks.
For Tuesday’s matchup, the Braves are sending out Ian Anderson. Over four outings so far, Anderson has 22.0 innings with 19 hits, eight earned runs, three homers allowed, 11 walks, 23 Ks and a 3.27 ERA. He went 6.2 innings with no earned versus the Yankees his last time out.

PICK: I’m going to take the Cubs in this one. Anderson is coming off a nice start at Yankee Stadium, posting 6.2 frames with four hits and no earned. The good news is that he’s allowed just three earned with no homers in his last pair; the bad news is that Anderson has also allowed eight walks in his last two games. Williams put up one run in five innings versus the Braves on April 17, so if he can pitch well again here the Cubs should be in a good spot. 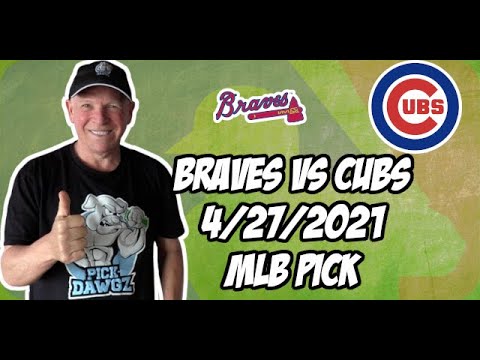