The Philadelphia Phillies and the St. Louis Cardinals meet Tuesday in MLB action from Busch Stadium.

This will be the second installment in a four-game set between these teams. In the Monday opener, we had a wild ninth inning as Philly eked out a one-run victory. Check back all season long for free MLB picks at Sports Chat Place.

Philadelphia played the Rockies over the weekend, winning Saturday but falling on Friday 5-4 and Sunday 12-2 to lose the series. On Monday, Philadelphia put up one run in the seventh and one more in the ninth to post a 2-1 win. Starter Zack Wheeler was great on 8.0 innings with one hit and one earned.
For the Tuesday game two start, the Phillies will send out Zach Eflin. So far this year, Eflin has 26. innings with 24 hits, eight earned runs, three homers allowed, two walks, 19 strikeouts and a 2.77 ERA overall. He went 6.0 innings with one earned versus the Giants his last time out.

Over on the Cardinals’ side, they were able to sweep the Reds this weekend, winning 5-4 Friday, 2-0 Saturday and 5-2 Sunday. In the Monday game, the St. Louis offense went cold with just two hits on the night. Adam Wainwright pitched a complete game with two earned, six hits and eight Ks in a tough-luck loss.

For the Tuesday starting role, the Cardinals will give the ball to Carlos Martinez. In his 21.0 innings so far, Martinez has 21 hits, 14 earned runs, two homers allowed, five walks, 13 strikeouts and a 6.00 ERA.

PICK: I’m going to stick with the Phillies. Martinez had a solid outing versus the Nationals his last time up with one earned on four hits across 6.0 innings. That said, Martinez had given up 13 earned over 15.0 innings in his previous three starts combined. Eflin has issued just one unintentional walk so far this year, and he’s hitting his spots well. I like Eflin to post another good outing in a Phillies win here. 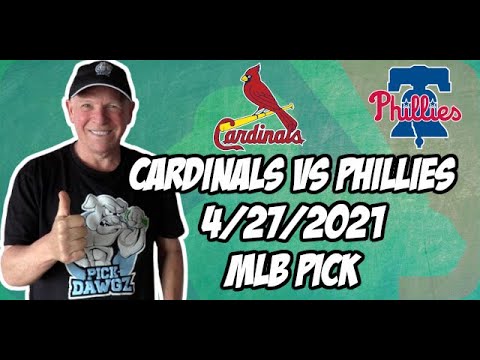