The Washington Nationals and the Toronto Blue Jays meet Tuesday in MLB action from Dunedin Stadium.

Washington managed to beat the Mets 7-1 on Saturday, but fell 6-0 Friday and 4-0 Sunday. Washington could only come up with five team hits in that one, with Yadiel Hernandez collecting two of them with a pair of walks. Patrick Corbin went 4.0 innings with four earned as well.

In the Tuesday starting pitcher role, the Nationals will send out Max Scherzer. In his four outings this year, Scherzer has 25.0 innings with 14 hits, five earned runs, four homers allowed, four walks, 33 Ks and a 1.80 ERA.

Over on the Jays’ side, they got a 5-3 win over the Rays on Friday then fell 5-3 on Saturday. Toronto won the series with a 1-0 victory on Sunday. Starting pitcher Hyun-jin Ryu notched 3.2 innings with three hits, no earned, a walk and five strikeouts there.

In the Tuesday starting pitcher slot, the Blue Jays are going with Trent Thornton. Over his 9.2 innings of work so far, Thornton has eight hits, two earned runs, three walks, six strikeouts and a 1.86 ERA. He’s coming off 2.0 clean innings against the Red Sox his last time out.

PICK: I’m going to stick with the Nationals here. Scherzer had a sketchy start to the season with 6.0 innings and four earned versus the Braves on April 6, but since then he’s given up just one earned run (and no homers) in 19.0 innings across three starts. Scherzer also has 19 strikeouts over his last two games. I like Thornton to open up well here also, but the Nats should be in good position. 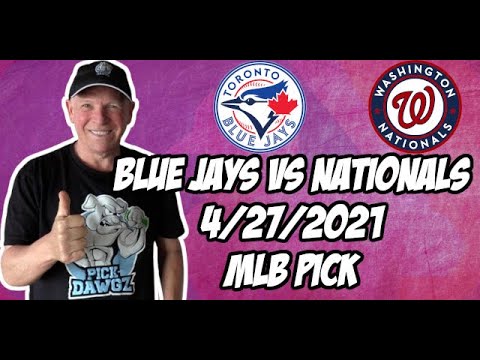