The Colorado Rockies look for a win after winning five of their last seven games. The Rockies have scored 19 runs in their last three games and four or more runs in seven of their last nine games. The Rockies have won six of their last seven games when scoring four or more runs. Trevor Story leads the Rockies with 23 hits and 13 RBI while Ryan McMahon and Raimel Tapia have combined for 46 hits and 23 RBI. German Marquez gets the ball, and he is 1-1 with a 3.45 ERA and 28 strikeouts this season. Marquez is 4-5 with a 5.46 ERA and 57 strikeouts in his career against the Giants.

The San Francisco Giants look for a win after winning seven of their last 10 games. The Giants have scored 21 runs in their last three games and four or more runs in six of their last eight games. The Giants have won five of their last eight games when scoring four or more runs. Evan Longoria leads the Giants with 18 hits and 12 RBI while Buster Posey and Mike Yastrzemski have combined for 34 hits and 13 RBI. Alex Wood gets the ball, and he is 2-0 with a 0.75 ERA and 11 strikeouts this season. Wood is 4-3 with a 6.52 ERA and 53 strikeouts in his career against the Rockies.

The Colorado Rockies are having a nice week, but I'm still not confident in this team and German Marquez is a pitcher who gets hit hard more often than not. The San Francisco Giants have still been very impressive at home and Alex Wood looks like he can be an all-star through 12 innings this season. I need to see more from the Rockies to believe this recent run is for real. Give me the Giants and the reasonable price.

The pick in this article is the opinion of the writer, not a Sports Chat Place site consensus.
Previous Pick
Arizona Diamondbacks vs San Diego Padres MLB Picks, Odds, Predictions 4/28/21
Next Pick
Hanwha Eagles vs. Kia Tigers: 4/29/21 KBO Baseball Pick, Odds, and Prediction 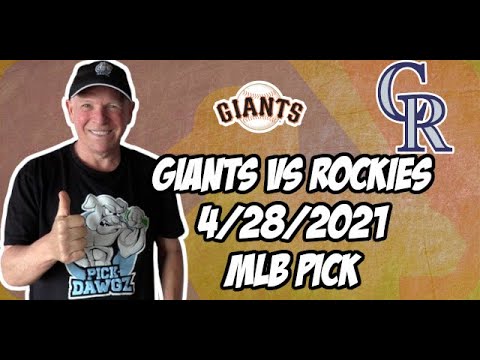