TV: MAS2, NSC+ Stream the MLB Game of the Day all season on ESPN+. Sign up now!

The Baltimore Orioles need a win after losing five of their last eight games. The Orioles have scored five runs in their last three games and four or more runs in six of their last 12 games. The Orioles have won seven straight games when scoring four or more runs. Cedric Mullins leads the Orioles with 33 hits and seven RBI while Trey Mancini and Maikel Franco have combined for 46 hits and 34 RBI. John Means gets the ball, and he is 2-0 with a 1.50 ERA and 29 strikeouts this season. Means is 1-1 with a 1.93 ERA and seven strikeouts in his career against the Athletics.

The Oakland Athletics look for a win after splitting their last six games. The Athletics have scored six runs in their last three games and three or less runs in five straight games. The Athletics have won six of their last nine games when scoring three or less runs. Matt Olson leads the Athletics with 24 hits and 17 RBI while Mark Canha and Jed Lowrie have combined for 45 hits and 24 RBI. Mike Fiers gets the ball, and he was 6-3 with a 4.58 ERA and 37 strikeouts last season. Fiers is 4-1 with a 1.93 ERA and 32 strikeouts in his career against the Orioles.

There's a case to be made for the Baltimore Orioles here, as John Means has been highly impressive through five starts and that includes just holding these A's to two hits and one run through 6.1 innings last Sunday. Mike Fiers will make his season debut and it can sometimes take guys a start or two before finding their rhythm. With that said, I'm still leaning toward the A's at home, as they're the more consistent team with the more trustworthy lineup. Fiers has also been really good pitching at the Oakland Coliseum. 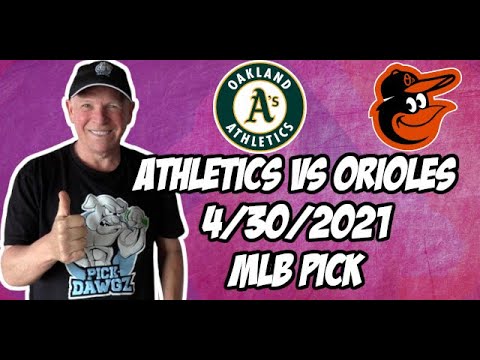