TV: MASN 2, NBCSCA Stream the MLB Game of the Day all season on ESPN+. Sign up now!

The Baltimore Orioles and the Oakland A’s meet in MLB action from the RingCentral Coliseum on Saturday afternoon.

The Baltimore Orioles will look to build on a 3-2 win over the A’s on Friday. Cedric Mullins led the O’s with a home run and two RBIs while Austin Hays had a solo home run as well to cap off the scoring for the Orioles in the win. Ryan Mountcastle went 2 for 4 at the dish while Ramon Urias added a double while Chance Sisco, Rio Ruiz and Pat Valaika each had a base hit as well to finish off the offense for the Orioles in the win. John Means got the win to improve to 3-0 after allowing two earned runs on three hits with nine strikeouts over seven innings of work. Matt Harvey will start here and is 2-1 with a 4.26 ERA and 21 strikeouts this season. This will be Harvey’s second career start against Oakland.

The Oakland A’s will look to bounce back from their loss to Baltimore on Friday. Sean Murphy went 2 for 4 with a solo home run and Mitch Moreland had a solo shot as well to make up the scoring for the A’s in the loss. Ramon Laureano and Matt Chapman each had a hit as well as the A’s had just five hits as a team in the losing effort. Mike Fiers took the loss falling to 0-1 on the year after allowing three earned runs on six hits with three strikeouts over six innings of work. Jesus Luzardo will start here and is 1-2 with a 5.40 ERA and 29 strikeouts this season. This will be Luzardo’s second career start against Baltimore.

The Orioles have to be feeling good about slamming the door shut with the A’s threatening in the bottom of the 9th on Friday, but I think Baltimore’s going to have a hard time building on that with Harvey pitching. I just have zero faith that he’s moved on from his down from over the years. Luzardo is the better pitcher with the better team behind him and I think Oakland gets revenge on Baltimore on Saturday. 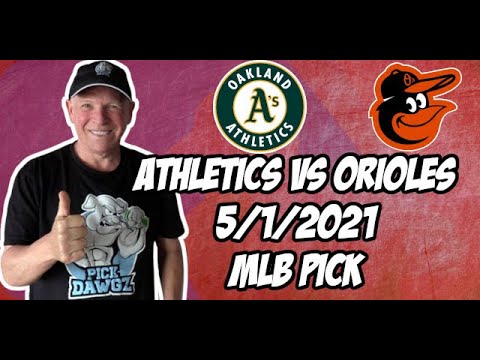