TV: SNY, NSP+ Stream the MLB Game of the Day all season on ESPN+. Sign up now!

The New York Mets need a win after losing seven of their last nine games. The Mets have scored two runs in their last three games and three or less runs in eight of their last 11 games. The Mets have lost six straight games when scoring three or less runs. Brandon Nimmo leads the Mets with 21 hits and eight RBI while Pete Alonso and JD Davis have combined for 33 hits and 18 RBI. Taijuan Walker gets the ball, and he is 1-1 with a 2.14 ERA and 23 strikeouts this season. Walker is 1-0 with a 1.74 ERA and 16 strikeouts in his career against the Phillies.

The Philadelphia Phillies look for a win after splitting their last 14 games. The Phillies have scored 10 runs in their last three games and three or less runs in five of their last six games. The Phillies have lost seven of their last 10 games when scoring three or less runs. Bryce Harper leads the Phillies with 25 hits and 10 RBI while Rhys Hoskins and JT Realmuto have combined for 48 hits and 25 RBI. Zack Wheeler gets the ball, and he is 2-2 with a 3.13 ERA and 35 strikeouts this season. Wheeler is 1-1 with a 3.71 ERA and 19 strikeouts in his career against the Mets.

The New York Mets probably have the pitching edge in this contest with Taijuan Walker on the mound, but their offense just isn't producing and it's going to be their downfall if it continues. Zack Wheeler hasn't been bad this season and he's familiar with a lot of these Mets players given he spent five years with the team. I'll give the edge to the Phillies at home. 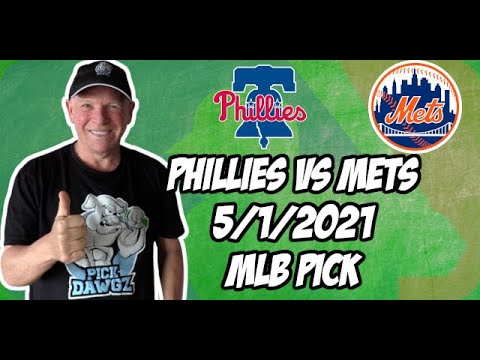