TV: BSWI, NSP+ Stream the MLB Game of the Day all season on ESPN+. Sign up now!

The Milwaukee Brewers look for a win after splitting their last eight games. The Brewers have scored 13 runs in their last three games and three or less runs in five of their last eight games. The Brewers have lost four of their last six games when scoring three or less runs. Omar Narvaez leads the Brewers with 25 hits and 11 RBI while Avisail Garcia and Travis Shaw have combined for 40 hits and 33 RBI. Eric Lauer gets the ball, and he is 1-0 with a 0.00 ERA and three strikeouts this season. This will be Lauer’s second career game against the Phillies.

The Philadelphia Phillies look for a win after splitting their last 10 games. The Phillies have scored 15 runs in their last three games and four or more runs in four of their last six games. The Phillies have split their last 10 games when scoring four or more runs. Rhys Hoskins leads the Phillies with 27 hits and 16 RBI while Bryce Harper and JT Realmuto have combined for 51 hits and 23 RBI. Aaron Nola gets the ball, and he is 2-1 with a 3.11 ERA and 39 strikeouts this season. Nola is 3-0 with a 2.97 ERA and 39 strikeouts in his career against the Brewers.

The Milwaukee Brewers continue to run hot and cold and it's hard to trust their offense against quality pitchers. Aaron Nola has been solid this season through 37.2 innings, averaging more than a strikeout inning and allowing just a .218 batting average. With the pitching edge and an offense that's a lot easier to trust, I'll lay the RL with the Philadelphia Phillies at home. 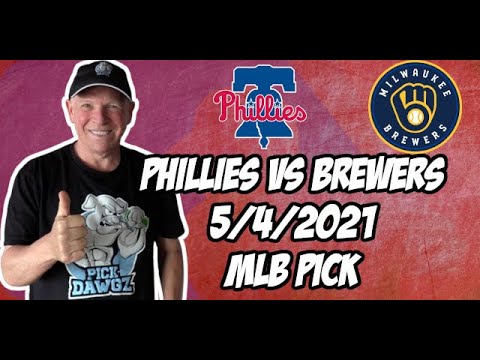