The Milwaukee Brewers and the Philadelphia Phillies meet Wednesday in MLB action from Citizens Bank Park.

This will be the third installment in a four-game set between these teams this week. The Phillies eked out a one-run win during the Monday opener, then on Tuesday Philly did it again with another one-run victory. Check back all season long for free MLB picks at Sports Chat Place.

Milwaukee gave up four runs in the first two innings in the Monday game and couldn’t catch up in a 4-3 loss. In the Tuesday game two, the Brewers coughed up five runs in the third inning and eventually lost 6-5.

For Wednesday’s starting pitcher role, the Brewers are sending out Freddy Peralta. Over his first half-dozen games this year, Peralta has 28.0 innings with 14 hits, seven earned runs, three homers allowed, 14 walks, 45 strikeouts and a 2.25 ERA.

Over on the Phillies’ side, they got 6.0 innings with four hits and one earned out of starter Vince Velasquez in the Monday victory. On Tuesday, Philadelphia caught fire in the third and hung on for the win despite getting out-hit 10-8. Starter Aaron Nola went 6.0 innings with five hits and one earned.
For the Wednesday game, the Phillies will be sending out Chase Anderson. Across 21.2 innings of work overall this year, Anderson has 21 hits, 13 earned runs, three homers allowed, 10 walks, 19 strikeouts and a 5.40 ERA.

PICK: I’m sticking with the Brewers. Anderson finally made it into the sixth inning during his last start versus the Mets, and overall he did well with just one earned on five hits. As for Peralta, he’s got a clean 3-0 record with a nice strikeout rate and is chugging along well. I like Peralta to put Milwaukee in position to win this one. 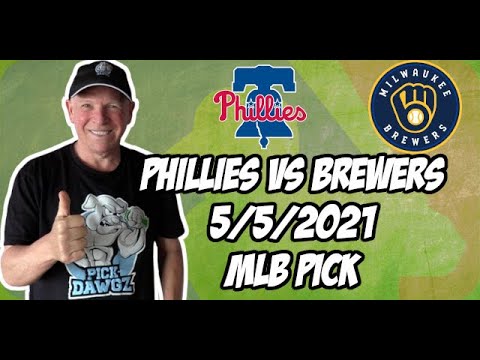