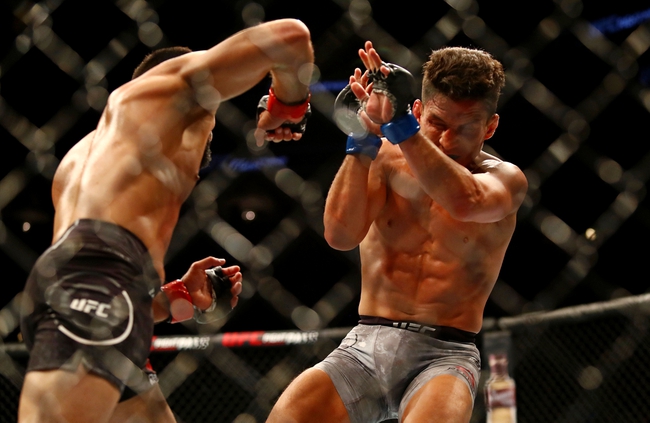 Joseph Benavidez enters this fight with a 28-5 record and has won 37 percent of his fights by decision. Benavidez has won nine of his last 10 fights and is coming off a June win over Jussier Formiga. Benavidez is averaging 3.45 significant strikes per minute with an accuracy percentage of 33 percent. Benavidez is averaging 1.45 takedowns with an accuracy percentage of 29 percent. Benavidez is coming off an impressive knockout victory that earned him performance of the night honors at UFC on ESPN 3, the second time in his last three bouts he’s earned a performance bonus. With a pair of knockouts the last couple of years, Benavidez is showing the flyweight division he’s still a force that demands respect. While approaching 36 years old, Benavidez is still the wild, fast and aggressive fighter he’s always been, as his standup is very unpredictable and creative. Benavidez will rush his opponent with big combinations that aren’t always accurate but the work rate gives him an edge, and he loves flying knees and kicks, as he showed in his last fight. Benavidez isn’t always the sexiest or most fundamentally sound fighter in the world, but his aggressiveness looks good to judges on the cards and he only needs one thing to land for him to finish things. Benavidez also has a background in wrestling and five of his nine career submissions have come via the guillotine choke. This will be Benavidez’s first career fight in Virginia.

Deiveson Figueiredo enters this fight with a 17-1 record and has won 50 percent of his fights by knockout. Figueiredo has won five of his last six fights and is coming off an October win over Tim Elliott. Figueiredo is averaging 2.43 significant strikes per minute with an accuracy percentage of 52 percent. Figueiredo is averaging 1.86 takedowns with an accuracy percentage of 50 percent. Figueiredo is coming off his fourth career victory via the guillotine choke and is 6-1 under the UFC banner. Figueiredo is one of those fighters who probably hasn’t gotten the respect he deserves, but his recent climb on this stage and the fact he just turned 32 years old does provide some hope he can start becoming a household name. Figueiredo is a balanced fighter who has great takedown ability, can fight from his back and his slippery on the canvas. With a deep wrestling background, Figueiredo is very comfortable in many spots a lot of fighters aren’t. Figueiredo has some pop in his hands that make him dangerous on his feet, but he also has great movement that make him very dangerous on counters and frustrating to his opponent. You rarely see Figueiredo get hit with a clean power shot. This will be Figueiredo’s first career fight in Virginia.

While this card may not be worth cancelling weekend plans, this is another solid main event on the ESPN+ schedule. You could really make a case for either of these fighters and a victory would do wonders for their careers moving forward. Figueiredo has an edge in this fight if he can keep it on the feet, and I strongly considered the plus money. However, Benavidez and the cheap price is the direction I’m leaning. Benavidez has enough in and out movement to survive in a striking contest, and his scrambling style along with his wrestling could give Figueiredo some issues the some way we saw in the Elliot fight before the submission. Benavidez is in slightly better form, is a little more polished and knows he needs a victory here as title shots aren’t always going to be there given his age.

Benavidez gets the nod in a competitive, thrilling fight.