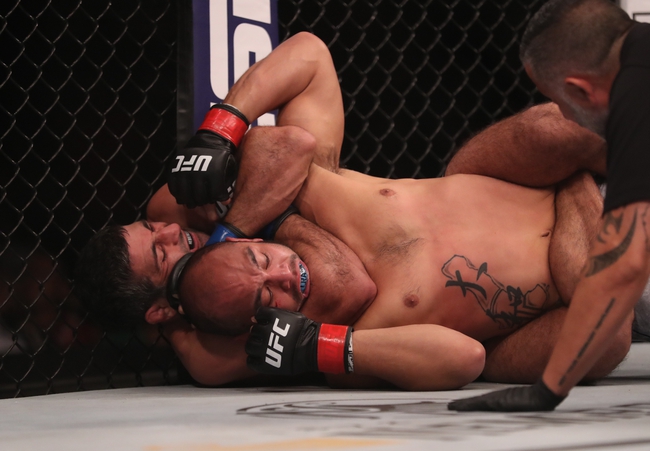 Beneil Dariush and Drakkar Klose fight Saturday during UFC 248 at the T-Mobile Arena.

Beneil Dariush enters this fight with a 17-4-1 record and has won 44 percent of his fights by submission. Dariush has split his last six fights and is coming off an October win over Frank Camacho. Dariush is averaging 3.91 significant strikes per minute with an accuracy percentage of 48 percent. Dariush is averaging 1.59 takedowns with an accuracy percentage of 31 percent. Dariush is coming off an impressive first round submission victory at UFC Fight Night 162 where he earned performance of the night honors, the second straight time he’s gotten such a bonus. Dariush now looks to win four straight fights for the first time in nearly five years and really put himself in a good spot. Dariush is a black belt in Brazilian Jiu-Jitsu and a black belt in Muay Thai, so he’s pretty much comfortable wherever the fight goes. Dariush has a nasty submission game and has only lost once on the canvas. Dariush also has an impressive gas tank and has won all six of his career decisions. Dariush has a decent standup and uses his legs very well, but he can leave himself open on his feet, and it’s led to him getting knocked out in three of his four carer losses. This will be Dariush’s third career fight in Las Vegas.

Drakkar Klose enters this fight with a 15-4-1 record and has won 60 percent of his fights by decision. Klose has won six of his last seven fights and is coming off an August win over Christos Giagos. Klose is averaging 3.45 significant strikes per minute with an accuracy percentage of 50 percent. Klose is averaging 1.6 takedowns with an accuracy percentage of 30 percent. Klose is coming off an impressive decision victory considering he could have easily been submitted in the first round, a fight where he landed 71 percent of his strikes and held his own on the canvas. Klose now looks to win four straight fights for the first time since starting his career with a 5-0 record. Klose comes from a wrestling background and is a blue belt in BJJ, but he seems to rely mostly on his standup and fighting out of the clinch. Each of Klose’s last eight fights have ended in decisions, so there is reason to question the power we saw earlier in his career. Klose has shown impressive conditioning to survive these decisions, good takedown defense throughout his time in the UFC, and he works all areas of the body with his standup striking. However, Klose has to show a killer instinct at some point if he’s going to be be taken seriously as a contender. This will be Klose’s third career fight in Las Vegas.

Klose has a chance to cash as an underdog if he can keep this fight on his feet and just pressure Dariush with volume strikes. Other than that, I don’t see Dariush losing this bout. Dariush has a clear advantage in the clinch and on the ground with his wrestling. You could also argue that Dariush has more power in his hands and cleaner strikes overall with his Muay Thai background. I’m just not sold on Klose quite yet, and he’s fighting a very experienced and balanced fighter in Dariush.

I look for Dariush to take control of this fight rather early and make Klose uncomfortable on his back. Give me Dariush by submission.