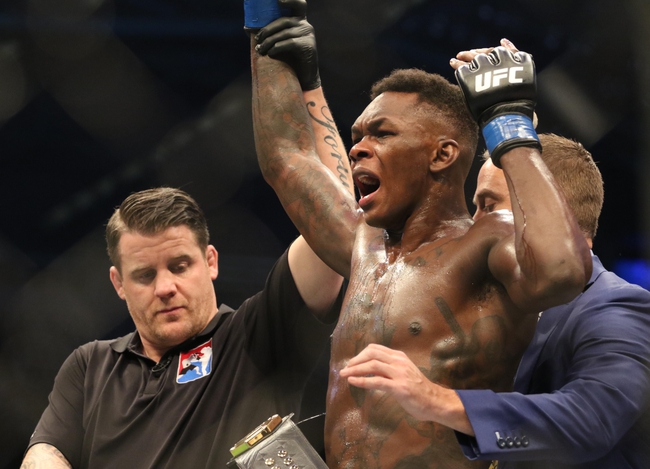 Israel Adesanya and Yoel Romero fight Saturday during UFC 248 at the T-Mobile Arena.

Israel Adesanya enters this fight with a 18-0 record and has won 78 percent of his fights by knockout. This will be Adesanya’s eighth fight since 2018, and he’s coming off an October win over Robert Whittaker. Adesanya is averaging 4.47 significant strikes per minute with an accuracy percentage of 53 percent. Adesanya is averaging zero takedowns with an accuracy percentage of zero percent. Adesanya is coming off an impressive second round knockout, and he’s now earned performance bonuses in each of his last five fights. After a couple of five round wars where Adesanya proved conditioning isn’t an issue, it was nice to see him be able to turn up the heat and finish a quality fighter rather quickly. Adesanya is simply an athletic freak who comes from a kickboxing and boxing background and is as crafty and creative as they come. Adesanya is long, rangy with an 80-inch reach, mixes in his leg kicks well and has an unorthodox stance that throws off his opponent. It’s hard to predict what Adesanya is going to do next, and when you throw in his striking power with the unpredictability, you get a dangerous fighter who has shown little weakness up to this point. However, Adesanya will have to prove at some point that he can survive the canvas and tap into that wrestling bag. This will be Adesanya’s second career fight in Las Vegas.

Yoel Romero enters this fight with a 13-4 record and has won 85 percent of his fights by knockout. Romero has lost three of his last four fights and is coming off an August loss to Paulo Costa. Romero is averaging 3.32 significant strikes per minute with an accuracy percentage of 51 percent. Romero is averaging 1.98 takedowns with an accuracy percentage of 35 percent. Romero is coming off a controversial decision loss, as he landed more strikes and produced a pair of takedowns, his second questionable decision loss in a row. Romero is still looking for his first win since UFC 221 and hopes to avoid three straight losses for the first time in his career. At nearly 43 years old, Romero is still a highly effective fighter who is accurate with his hands and one of the more decorated wrestlers in the sport. Romero usually gets the fight where he wants it and has a nasty ground and pound. Few want to be on the canvas with the Soldier of God given his lengthy wrestling background, even though none of his fights have ended in submission. Romero still has terrific power in those hands and closes the distance at an elite level. This will be Romero’s fourth career fight in Las Vegas.

A case can be made for Romero, as his ability to close the distance does takeaway the reach advantage of Adesanya and his grappling ability makes this a dangerous opponent for the champ. If this fight goes several rounds, Adesanya will have to fight out of the clinch and may be tested on the canvas as well. This isn’t a comfortable fight for Adesanya where he’ll be able to pick apart all day on his feet. With that said, Romero is a big guy who can gas rather quickly, and he’s no longer a spring chicken at nearly 43 years old. Romero has also fought out of the third round just once in his career. Adesanya should be able to slow Romero down with kicks and keep a good portion of this fight at a distance.

Because of the conditioning and youth of Adesanya, I like the champ to remain the champ and will take him within distance for more value on my bet.