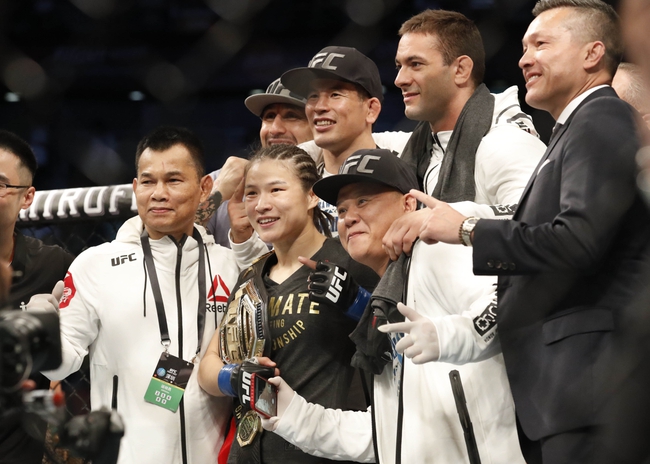 Weili Zhang and Joanna Jedrzejczyk fight Saturday during UFC 248 at the T-Mobile Arena.

Weili Zhang enters this fight with a 20-1 record and has won 47 percent of her fights by knockout. Zhang has won each of her last 20 fights, and she’s coming off an August win over Jessica Andrade. Zhang is averaging 5.49 significant strikes per minute with an accuracy percentage of 46 percent. Zhang is averaging 1.78 takedowns with an accuracy percentage of 31 percent. Zhang is coming off an absolutely ridiculous performance where she landed clean overhands, relentless knees and elbows to produce a first round knockout. It was nonstop action from the beginning, and Zhang showed she’s willing to trade in the middle of the octagon and has the tools to hurt anybody within this division. Zhang hasn’t lost since her pro debut back in 2013, and she’s finished 17 of the bouts during this 20-fight winning streak. Zhang has a complete fighting style, as she has a background in kickboxing and is just as effective with her knees, and her constant pressure, aggressive approach in her standup where she unleashes combinations and a relentless gas tank. Zhang has a killer instinct that you don’t see all the time on the woman’s side of this sport, and her last performance likely only takes her confidence to a brand new level. This will be Zhang’s second career fight in Las Vegas.

Joanna Jedrzejczyk enters this fight with a 16-3 record and has won 67 percent of her fights by decision. Jedrzejczyk has split her last six fights and is coming off an October win over Michelle Waterson. Jedrzejczyk is averaging 6.07 significant strikes per minute with an accuracy percentage of 46 percent. Jedrzejczyk is averaging 0.14 takedowns with an accuracy percentage of 67 percent. Jedrzejczyk got a much needed victory by dominating the Karate Hottie, doing whatever she wanted on her feet and producing a few takedowns. Jedrzejczyk entered that bout losing three of her last four fights, so it was nice to see her have her way with a respectable opponent, proving the former champ can’t be counted out despite some rocky results. Jedrzejczyk is an extremely decorated kick boxer who is highly effective with her knees and legs, and she’s an overall highly efficient striker with superb accuracy and a background in boxing. Jedrzejczyk has great technique, knows how to finish her opponent despite most of her fights ending in decision, and she’s most comfortable on her feet. Jedrzejczyk is also conditioned for the long haul, as each of her last six victories have gone the distance, and she’s seen the fifth round in seven of her last nine fights. Conditioning is not an issue for the 32-year-old from Poland. This will be Jedrzejczyk’s second career fight in Las Vegas.

There’s some value to Jedrzejczyk and the big plus money here given than she’s a hungry fighter who is eager to get her belt back, and she has the size advantage and is one of the better fighters at stuffing takedowns, so she’ll keep the fight on her feet and will be able to use that size to her benefit. The problem is I’m not betting against Zhang. We’ve been on the Zhang bandwagon for a while now and cashed easily on her when she was an underdog at UFC Fight Night 157. If you liked Zhang before that fight, you have to like her even more now. Zhang is a pitbul in the octagon who throws everything and the kitchen sink at her opponents, and her chin has improved over her career to allow her to stand in the middle and be a wild, crazy fighter. I’m not sure Jedrzejczyk will be able to deal with the pressure that Zhang brings and I wouldn’t be shocked if she gets knocked out.

I’d love to get a slightly cheaper price and I’ll wait to see what a TKO / KO price is for Zhang to trim down this ML price, but I have Magnum winning the fight no matter how you slice it.