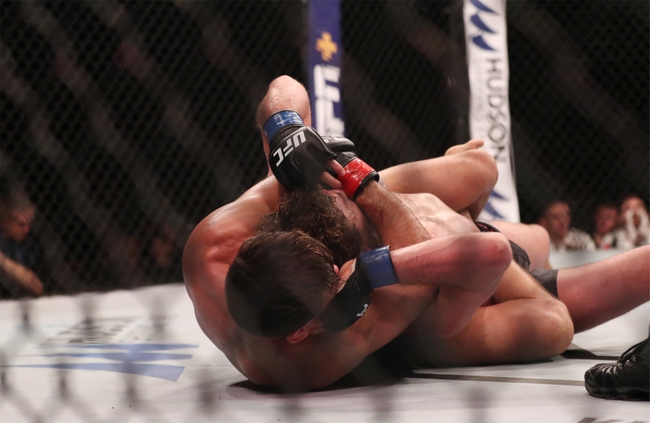 Demian Maia enters this fight with a 28-9 record and has won 52 percent of his fights by submission. Maia has split his last six fights and is coming off an October win over Ben Askren. Maia is averaging 1.82 significant strikes per minute with an accuracy percentage of 43 percent. Maia is averaging 2.4.9 takedowns with an accuracy percentage of 25 percent. Maia has bounced back from three straight losses with three straight wins, and he just submitted one of the better wrestlers in the sport, earning fight of the night honors at UFC Fight Night 162. Right when you’re ready to count out the 42-year-old, Maia shows there’s still plenty left in the tank, especially if he can get the fight where he wants it. There’s no surprises ever with Maia, as he’s a grappling machine and easily one of the best ground fighters the sport has ever seen. Maia is a well decorated grappler who usually gets the fight where he’s most comfortable, and that’s why he’s been finished just once in his entire career. Maia also has a vicious ground and pound attack, as he lands 43 percent of his strikes on the canvas. Simply put; Maia has the advantage if he can get a fight to the canvas. This will be Maia’s 10th career fight in Brazil, his birthplace.

Gilbert Burns enters this fight with a 17-3 record and has won 47 percent of his fights by submission. Burns has won each his last four fights and is coming off a September win over Gunnar Nelson. Burns is averaging 2.6 significant strikes per minute with an accuracy percentage of 39 percent. Burns is averaging 2.5 takedowns with an accuracy percentage of 25 percent. Burns has bounced back nicely since being knocked out by Dan Hooker, and he now looks for five straight wins for the first time since he started his career with a 5-0 record. Burns has a decorated grappling background with plenty of experience in wrestling, and he’s a second degree black belt in BJJ. Burns is quick to find a submission hold once he gets the bout to the canvas and few have his grappling credentials, but he’s also decent on his feet with some pop in his hands and a come forward style. Burns doesn’t look as uncomfortable standing up as many guys with his background do, and he has five knockout wins on his resume. This will be Burns’ 11th career fight in Brazil, his birthplace.

Burns should be the favorite here considering he has more ways to win the fight and would have a considerable advantage standing up. However, that’s the case against most guys Maia fights, and he still finds ways to get the fight where he wants it and makes things tough no matter the result. Maia is too accomplished on the ground and has been impressive in his last few bouts to where it’s tough to ignore the plus money with the veteran Brazilian.

I’m going to back another underdog and side with Maia for the victory.