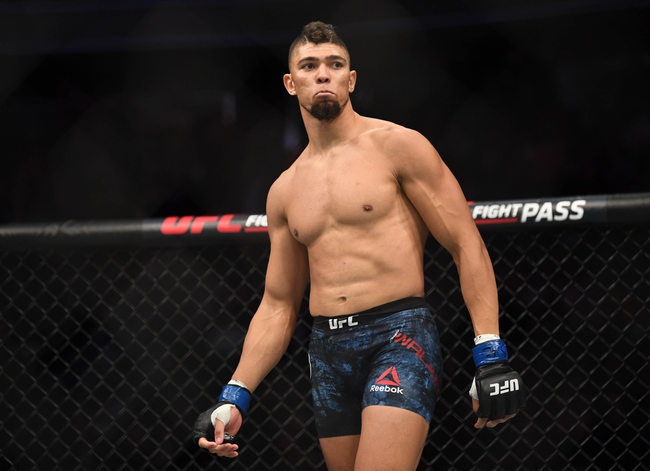 Johnny Walker enters this fight with a 17-4 record and has won 82 percent of his fights by knockout. Walker has won nine of his last 10 fights and is coming off a November loss to Corey Anderson. Walker is averaging 7.5 significant strikes per minute with an accuracy percentage of 77 percent. Walker is averaging zero takedowns with an accuracy percentage of zero percent. Walker went from being one of the most hyped fighters in the UFC to getting finished in the first round of UFC 244 and having people questioning if he’s really the next big thing. Remember, there were people saying Walker was somebody who could give Jon Jones a run for his money. However, even with the humbling loss, Walker is a star in this sport due to his devastating striking power and creativity. Walker throws everything hard with great variety and can finish a fight out of nowhere, and we’ve seen it countless times on the UFC level. Walker is very athletic for a guy his size and fights with a great deal of pressure that allows him to take chances. Don’t let the goofy and sometimes cringe personality fool you, Walker is a scary fighter, but it’s going to be interesting to see how he rebounds from such a performance. This will be Walker’s 14th career fight in Brazil, his birthplace.

Nikita Krylov enters this fight with a 25-7 record and has won 58 percent of his fights by submission. Krylov has won seven of his last 10 fights and is coming off a September loss Glover Teixeira. Krylov is averaging 4.86 significant strikes per minute with an accuracy percentage of 57 percent. Krylov is averaging 1.06 takedowns with an accuracy percentage of 38 percent. Krylov is coming off a tough split decision loss at UFC Fight Night 158, and he hopes to avoid back-to-back losses for the first time in his career. The fight could have gone either way, as both fighters were highly effective with their strikes and accuracy. Krylov is a tough Ukraine fighter with a proven chin and a powerful standup striking game where he mixes in his leg kicks and knees well. Krylov is just as effective in the clinch and also has a strong ground and pound where he can turn fight quickly. While his striking can’t be ignored, Krylov is a proven wrestler with 15 submission victories and is extremely dangerous once he gets his opponents back, as now six of his wins have finished via the rear-naked choke. Only eight of Krylov’s fights have made it past the first round, and he’s been on the winning side of five of those bouts. This will be Krylov’s first career fight in Brazil.

Krylov is a live dog in this fight, as he’d have a clear edge on the canvas, and his toughness standing up gives him a chance to hang around until he can get the fight where he wants it. You can do a lot worse with Krylov at this price. With that said, Walker is a fighter we were high on from the beginning before he became a media star, and we’re not going to let one loss knock us off the hype train. Walker has a massive size advantage in this fight, and his accuracy and creativity on his feet makes him tough to bet against as long as he can keep it there. We also don’t see Walker at these prices often and once he gets rolling again, you’re not going to see them in the future.