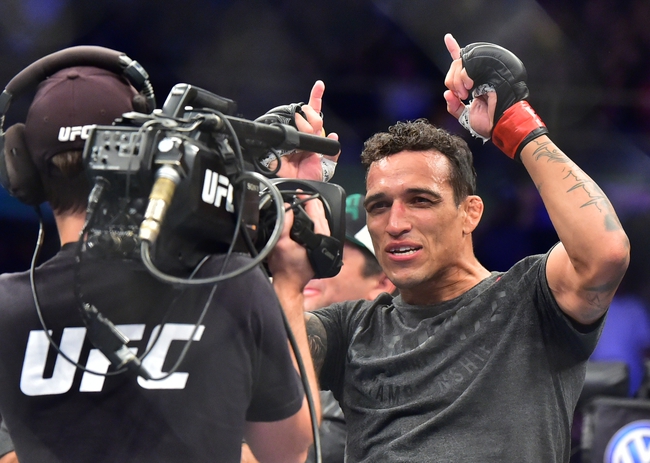 Kevin Lee enters this fight with a 18-5 record and has won 44 percent of his fights by submission. Lee has split his last six fights and is coming off a November win over Gregor Gillespie. Lee is averaging 4.06 significant strikes per minute with an accuracy percentage of 43 percent. Lee is averaging 3.1 takedowns with an accuracy percentage of 43 percent. Lee returned to lightweight with a bang, landing a devastating head kick that produced a clean knockout. Lee spent the whole fight on his feet, which was a nice change of pace, and he now looks to win back-to-back victories for the first time since 2017. Lee has all the potential in the world to be great, but he’s been inconsistent for the most part and has a reputation of showing up small in his biggest fights. Hopefully Lee’s most decent showing is the turning point of his career. Lee is a terrific athlete with good enough striking to hold his own standing up and enough power to always keep him in fights. Lee has a nasty ground and pound and it’s there where he does some of his best work. Lee is also one of the better wrestlers in the sport and five of his eight career submission victories have come via the rear-naked choke. If he can start stringing wins together, Lee is more than capable of becoming champion at some point. This will be Lee’s second career fight in Brazil.

Charles Oliveira enters this fight with a 24-8 record and is winning 64 percent of his fights by submission. Oliveira has won six straight fights and is coming off a November win over Jared Gordon. Oliveira is averaging 3.18 significant strikes per minute with an accuracy percentage of 50 percent. Oliveira is averaging 2.8 takedowns with an accuracy percentage of 43 percent. Oliveira is also coming off an impressive first round knockout and each of his last nine wins have been finishes. Oliveira has also earned performance of the night honors in five of his last six fights. Oliveira is one of the better grapplers in the sport who has a high takedown percentage and an impressive submission game to where most don’t want to fight him on the canvas. Oliveira has 18 career submission victories to his name and seven of those wins came by rear-naked choke. While Oliveira is known for his scrappy ground game, he’s also proven he can hold his own on his feet, as he moves well, mixes in leg kicks and gets in and out with his combinations. Oliveira has quickly become a balanced fighter who finishes fights on his terms and is almost always the most exciting bout on the card. This will be Oliveira’s 17 career fight in Brazil, his birthplace.

Lee is somebody the media keeps hyping up to be that next great fighter and his last bout only adds fuel to the fire. The problem is Lee has been up and down these last few years and right when you’re ready to believe, he lets you down and makes you question his ability. Oliveira is the more balanced fighter here and would have the edge if this ends up being a standup bout like his last fight. And while Lee is a world class wrestler, Oliveira is a black belt in BJJ and one of the top submission artists in the UFC, regardless of weight class. It almost feels like we’re getting the better fighter as an underdog, and he’s fighting his own country.

I’ll take Oliveira at plus money.