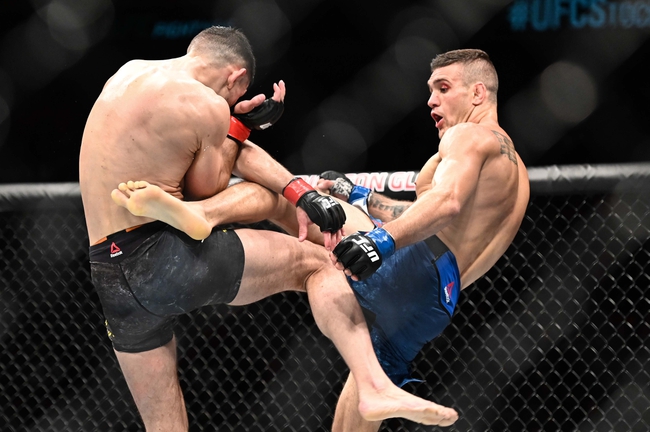 Renato Moicano enters this fight with a 13-2-1 record and has won 54 percent of his fights by decision. Moicano has split his last six fights and is coming off a June loss to Chan Sung Jung. Moicano is averaging 5.53 significant strikes per minute with an accuracy percentage of 46 percent. Moicano is averaging 1.16 takedowns with an accuracy percentage of 54 percent. Moicano is kind of in a must-win situation, as he’s coming off back-to-back knockout losses and has been finished three times in his last five fights. We can’t forget that Moicano was sitting pretty with an 11-0-1 record and climbing the rankings quickly fresh off a win over Jeremy Stephens. It’s interesting to see how Moicano handles things now that his stock has dropped a bit. Moicano is an athletic fighter who has displayed good accuracy in his strikes and lands his best strikes standing up. However, Moicano is most known for his ground game, as he’s aggressive and accurate with his takedowns, and all 13 of his wins have come by decision or submission. Moicano is averaging nearly 12 minutes per fight and over a takedown per 15 minutes, so he’s built for the long game and is well conditioned to be effective when most fighters are sucking wind. Moicano is a slippery, lengthy fighter who is hard to get comfortable against, but that reputation could change if he gets finished again. This will be Moicano’s 13th career fight in Brazil, his birthplace.

Damir Hadzovic enters this fight with a 13-2-1 record and has won 54 percent of his fights by knockout. Hadzovic has split his last six fights and is coming off a June loss to Christos Giagos. Hadzovic is averaging 3.42 significant strikes per minute with an accuracy percentage of 48 percent. Hadzovic is averaging 0.59 takedowns with an accuracy percentage of 50 percent. Hadzovic has been hit or miss since coming to the UFC four years ago, and he hopes to avoid back-to-back losses for the second time in his career. Hadzovic has a boxing and wrestling background, and his ground and pound is probably his most effective tool up to this point. Hadzovic has massive power in his hands and he’s most effective when he can mount his opponent and just unload on them. Hadzovic got a late start to the sport and his technique still isn’t great standing up or on the canvas, but he’s scrappy and has a brawler type feel to his game. Hadzovic has also only been finished once despite five career losses. This will be Hadzovic’s second career fight in Brazil.

I can make a case for either of these fighters, as it really just depends on who gets to fight their style and who can gain top position on the canvas where the fight is likely going to end up. The price feels a bit off, so instead of picking a side, I’m going to predict this fight goes to the judges. Moicano is known for dragging fights out and playing the long game, while Hadzovic has seen decisions in three of his last four fights and doesn’t have the technique to consistently end fights on his terms.

Expect a competitive fight that goes the distance.