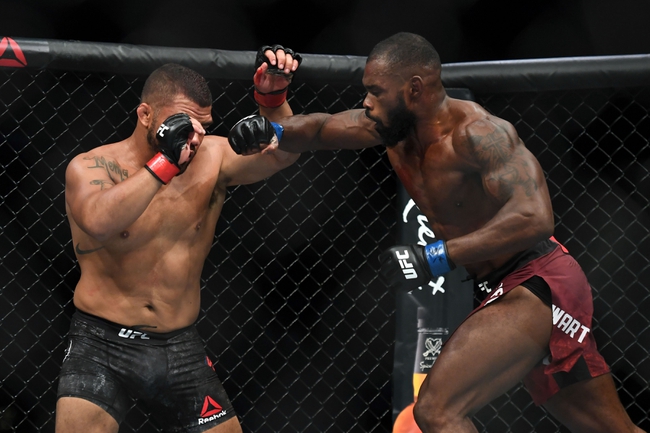 Darren Stewart enters this fight with a 11-4 record and has won 70 percent of his fights by knockout. Stewart has won four of his last five fights and is coming off an October win over Deron Winn. Stewart is averaging 2.96 significant strikes per minute with an accuracy percentage of 43 percent. Stewart is averaging 1.84 takedowns with an accuracy percentage of 41 percent. Stewart is coming off a tight split decision that you could argue he lost, but he was rewarded the victory over an opponent who didn’t make weight. Stewart has now put together a nice little winning stretch after he struggled coming into the UFC back in 2016, and he can continue to turn some heads with a victory here as well, especially with his opponent changing at the last minute. Stewart is a violent fighter who simply unloads on his opponent no matter where the fight goes. Whether Stewart is throwing haymakers on his feet or attempting tackle style takedowns to position a ground and pound, you can tell The Dentist is out to hurt his competition. There’s little feeling things out or using a jab to set up combinations, Stewart unloads in everything he throws. The downside is that Stewart can be a bit wild in the octagon and it leaves opening for counters, but the 29-year-old is going to take his chances, and if he connects with something, he has the ability to finish things quickly. This will be Stewart’s 10th career fight in England, his birthplace.

Bartosz Fabinski enters this fight with a 14-3 record and has won 57 percent of his fights by knockout. Stewart has won 10 of his last 12 fights and is coming off a November (2018) loss to Michel Prazeres. Stewart is averaging 2.22 significant strikes per minute with an accuracy percentage of 70 percent. Stewart is averaging 7.17 takedowns with an accuracy percentage of 71 percent. Fabinski hasn’t fought since UFC Fight Night 140 when he was submitted in the first round, and now he’s being thrown a new opponent at the last minute. This can’t be the most ideal situation for Fabinski after such a long layoff. Regardless, Fabinski has never lost back-to-back fights in his career and this is easily the longest time he’s gone between fights since turning pro in 2011. Fabinski is a tough Polish fighter who has never been knocked out and comes from an early background in Judo. Fabinski has good cardio that’s allowed him to win six of his seven career decisions and he fights his best in the clinch or on the canvas where he can put those grappling skills to good use. However, Fabinski has pop in his hands as well and has produced some violent knockout victories that includes a pair of doctor stoppages. This will be Fabinski’s first career fight in England.

Fabinski can certainly win this fight if he gets it in the clinch and eventually on the ground where Stewart almost always gives his back and looks uncomfortable. The problem is Fabinski hasn’t been in the octagon in forever and just had his opponent switch up on him, which is an even tougher situation. We don’t have to worry about rust with Stewart, and you have to give him a considerable edge on the feet where his hands are sharper and there’s more raw power in those strikes.

Stewart should win this fight on his home soil.