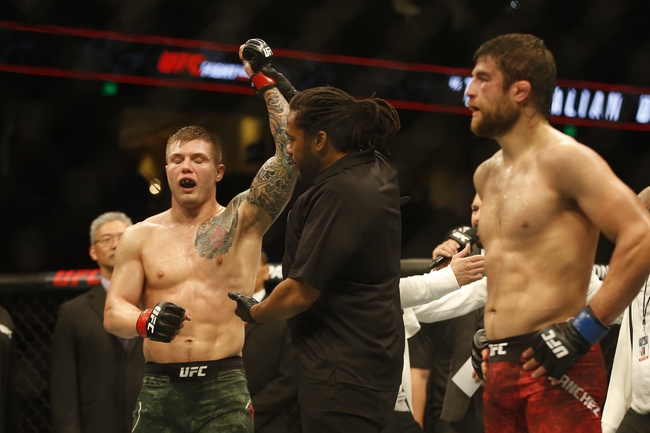 Darren Stewart enters this fight with a 11-4 record and has won 70 percent of his fights by knockout. Stewart has won four of his last five fights and is coming off an October win over Deron Winn. Stewart is averaging 2.96 significant strikes per minute with an accuracy percentage of 43 percent. Stewart is averaging 1.84 takedowns with an accuracy percentage of 41 percent. Stewart is coming off a tight split decision that you could argue he lost, but he was rewarded the victory over an opponent who didn’t make weight. Stewart has now put together a nice little winning stretch after he struggled coming into the UFC back in 2016, and he can continue to turn some heads with a victory here as well. Stewart is a violent fighter who simply unloads on his opponent no matter where the fight goes. Whether Stewart is throwing haymakers on his feet or attempting tackle style takedowns to position a ground and pound, you can tell The Dentist is out to hurt his competition. There’s little feeling things out or using a jab to set up combinations, Stewart unloads in everything he throws. The downside is that Stewart can be a bit wild in the octagon and it leaves opening for counters, but the 29-year-old is going to take his chances, and if he connects with something, he has the ability to finish things quickly. This will be Stewart’s 10th career fight in England, his birthplace.

Marvin Vettori enters this fight with a 14-4-1 record and has won 62 percent of his fights by submission. Vettori has split his last six fights and is coming off an October win over Andrew Sanchez. Vettori is averaging 3.75 significant strikes per minute with an accuracy percentage of 42 percent. Vettori is averaging 1.7 takedowns with an accuracy percentage of 45 percent. Vettori is coming off a dominating decision victory where he landed more than double his opponents strikes at double the percentage. Vettori has now won back-to-back fights since his 2018 loss to Israel Adesanya, and he has a chance to play spoiler on his opponents home soil. Vettori is a balanced fighter who could soon become a star given that he’s only 26 years old. Vettori is highly skilled on his feet where he throws violent combinations, but he’s also quite an athlete for his size and loves to throw knees out of nowhere, which we saw against Omari Akhmedov. Vettori is also highly effective in the clinch and has good scrambling skills that allow him to survive on the canvas. Vettori’s last three submission victories have come via the guillotine choke. This will be Vettori’s fourth career fight in England.

Stewart is worth a look here given his raw power, the fact he can end things with one shot and it’s always appealing to get plus money with a fighter who is looking for the kill at all times. However, Stewart is too wild to trust against a fighter as technically sound as Vettori, who does a lot of things Stewart does better and cleaner. Vettori will use Stewart’s aggressiveness against him and probably hurt him at some point.