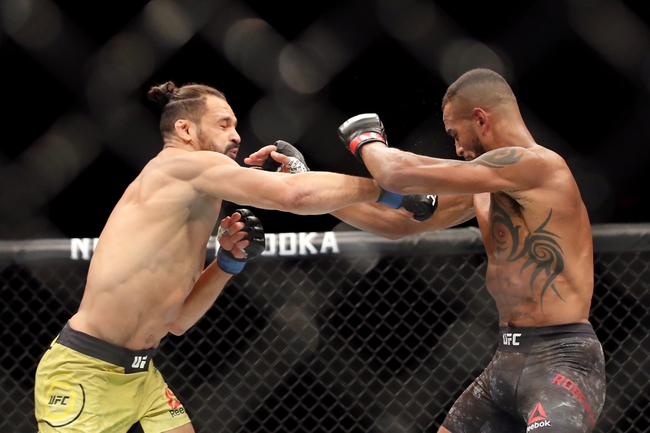 Nicolas Dalby enters this fight with a 18-3-1 record and has won 41 percent of his fights by decision. Dalby has won four of his last five fights, and he’s coming off a September win over Alex Oliveira. Dalby is averaging 3.27 significant strikes per minute with an accuracy percentage of 38 percent. Dalby is averaging two takedowns with an accuracy percentage of 50 percent. Dalby is coming off a convincing victory in his return to the UFC, landing 52 percent of his total strikes and earning an unanimous decision victory. Three of Dalby’s last six victories have gone the distance. Dalby is now 2-2-1 under the UFC banner. Dalby is a balanced fighter with a karate background and has proven he can be very successful with takedowns. Dalby also held his own on the canvas in his last fight when he was taken down three times. Coming off probably the biggest win of his career, Dalby is a fighter who is here to turn heads if he can build on his last bout. This will be Dalby’s fourth career fight in England.

Danny Roberts enters this fight with a 14-0 record and has won 44 percent of his fights by knockout. Roberts has split his last eight fights, and he’s coming off a November win over Zelim Imadaev. Dalby is averaging 3.42 significant strikes per minute with an accuracy percentage of 42 percent. Roberts is averaging zero takedowns with an accuracy percentage of zero percent. Roberts is coming off an impressive second round knockout at UFC Fight Night 163, his eighth career knockout victory. Roberts now hopes to win back-to-back fights for the first time since 2018. Roberts comes from a boxing background and proved he has extreme power in his hands, producing a pair of one punch knockouts on his resume. Roberts is also comfortable on the canvas and can fight from his back, and he has a variety of creative submission victories. At 32 years old, Roberts has enough exciting performances and balance in his game to where he should be bigger than he is, and he can start with a convincing victory here. This will be Roberts’ 15th career fight in England, his birthplace.

I honestly think we’re getting the better fighter as an underdog, as Roberts has the striking to hang with Dalby on the feet, and you can argue he has the power edge as well. Roberts is also very comfortable on the canvas and has proven he can fight from his back and find unique submission holds. Dalby has been inconsistent under the UFC banner and hasn’t had a whole lot of success in his bigger fights.

Give me Roberts and the favorable price.