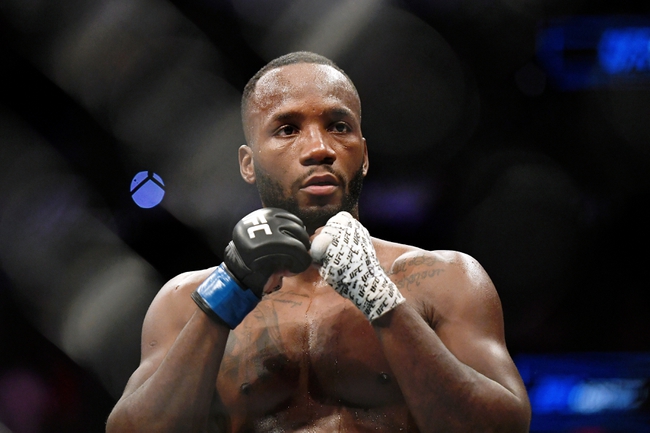 Tyron Woodley enters this fight with a 19-4-1 record and has won 37 percent of his fights by knockout. Woodley has won six of his last eight fights and is coming off a March (2019) loss to Kamaru Usman. Woodley is averaging 2.64 significant strikes per minute with an accuracy percentage of 47 percent. Woodley is averaging 0.44 takedowns with an accuracy percentage of 38 percent. It’s been a while since we’ve seen Woodley in the octagon, and he was absolutely dominated in his last fight. Maybe the time off was good for Woodley, as it allowed him to clear his head, and he now looks to avoid back-to-back losses for the first time in his career. Even with the poor performance, there’s no question Woodley is one of the more balanced welterweights in the history of the sport. Woodley has a nasty standup game with extreme power in his hands and violent leg kicks that do serious damage on the feet. Woodley also has a background in wrestling, and while he hasn’t gone for a ton of takedowns under the UFC banner, he’s quite effective when he shoots and has an impressive ground and pound if a fight goes to the canvas. Woodley is smart, solid defensively and should be eager to redeem himself and possibly build enough hype to create an eventual rematch with Usman. This will be Woodley’s first career fight in England.

Leon Edwards enters this fight with a 18-3 record and has won 47 percent of his fights by decision. Edwards has won each of his last eight fights and is coming off a July win over Rafael dos Anjos. Edwards is averaging 2.35 significant strikes per minute with an accuracy percentage of 49 percent. Edwards is averaging 1.33 takedowns with an accuracy percentage of 31 percent. Edwards is coming off a dominating performance at UFC on ESPN 4 where he controlled all five rounds and really kind of put himself on the map to fans who weren’t quite sure he was this good. Edwards still hasn’t lost since his 2015 bout against Kamaru Usman, and he’s proving he’s truly one of the best in this division. Edwards entered the UFC as a powerful striker, but it’s his heavy wrestling approach that’s helped him string together all of these victories. Edwards has fought well in the clinch and is doing a much better job of making the fighter uncomfortable, as it’s no longer a brawl type feel where they both can trade strikes. Edwards is controlling the fight from start to finish and his confidence is rising each time he takes the octagon. Edwards is a crafty southpaw who can be tricky for his opponents. This will be Edwards’ 14th career fight in England, his birthplace.

Getting Woodley at this price is really tough to turn down, as he’s still on of the best welterweights in the world regardless of how he looked his last time out. The problem is Edwards is on such a roll and looked so dominant in his last fight, that it’s hard to step in front of him right now, especially when he’s fighting in the comfort zone of his own country. Edwards can strike with Woodley standing up, but he can also back the American up against the cage and just wear on him while landing elbows and knees. Edwards is a hot fighter who is on a mission to become a household name, and he’s getting far more confident in his plan of attack rather than head hunting with power shots.

The pick in this article is the opinion of the writer, not a Sports Chat Place site consensus.
Previous Pick
Jack Marshman vs. Kevin Holland - 3/21/20 UFC Fight Night 171 Pick, Odds, and Prediction
Next Pick
What's The Fastest Knockouts In UFC History?