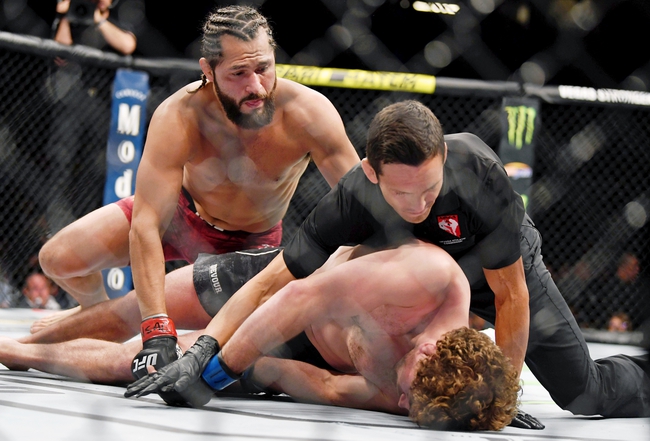 The Fastest Knockouts In UFC History

UFC has become the fastest growing sport over the last few years, as the combination of technique and violence has created a beautiful art form and gotten more and more people to appreciate MMA. And while there’s many ways to win a fight in this sport, nothing gets a reaction like the knockout, especially when that knockout is quick and out of nowhere.

Here are the fastest knockouts in UFC history.

1. Jorge Masvidal, UFC 239, five seconds - Jorge Masvidal knocked out Ben Askren by running up with a flying knee and landing it right on the chin of his opponent who was lowing his head for a takedown. While some say it was luck, there’s actual video of Masvidal practicing the exact technique leading up to the fight, knowing Askren often tries those takedown attempts. It’s damn near impossible to get a faster knockout.

2. Duane Ludwig, UFC Fight Night 3, six seconds - Duane Ludwig and Jonathan Goulet were circling each other until Ludwig landed a right hand that ended the fight. It wasn’t even the most powerful shot in the world. Goulet ended up having a decent career, but he looked like an amateur in those few seconds if we’re being completely honest.

3. Todd Duffee, UFC 102, seven seconds - Todd Duffee refused to touch gloves with Tim Hague, and he backed up the disrespect by landing a quick left jab and finishing his opponent with ground and pound. Hague was knocked out cold, and he was never the same after that, going 11-11 in his next 22 fights when he entered this bout with a 10-1 record.

3. Chan Sung Jung, UFC 140, seven seconds - Mark Hominick put everything into a right hand that missed, which gave Chan Sung Jung all the room in the world for a counter that he then finished with ground and pound. It was a really poor decision from Hominick, and he later went on to lose his next two fights and then retire.

3. Ryan Jimmo, UFC 149, seven seconds - Anthony Perosh didn’t have his hands up high enough in defense, giving Ryan Jimmo just enough space to land a devastating right hand that dropped the Aussie with the quickness. Jimmo followed it up with another punch to the face but it wasn’t needed. Perosh went 2-3 in his next five fights and called it quits after UFC 193.

6. Don Frye, UFC 8, eight seconds - Don Frye and Thomas Ramirez exchanged a little bit in the first couple seconds until Frye backed up his opponent and landed a quick right hook that knocked the lights out. Ramirez looked several out of shape and somebody who probably had little fighting experience leading up to this bout. It was the first pro fight for Frye, and he went on to have a 20-9-1 MMA record.

6. James Irvin, UFC Fight Night 13, eight seconds - James Irvin threw a right cross that dropped Houston Alexander, and he followed it up with a few heavy blows on the canvas. Alexander immediately got up after the stoppage, but it was a good call by the ref, as he was out and couldn’t defend himself. Alexander went on to get knocked out eight more times.

6. Leon Edwards, UFC Fight Night 64, eight seconds - Seth Baczynski came in trying to be the aggressor by throwing multiple strikes and even attempting a leg kick as Edwards caught him with a right hand. Edwards threw a pair of strikes on the canvas for good measure before he walked away before the ref even stepped in. You can actually see Edwards turnaround a couple seconds later just to make sure the fight was actually stopped.

6. Makwan Amirkhani, UFC on Fox 14, eight seconds - Makwan Amirkhani landed a flying knee on Andy Ogle and followed it up with a little ground and pound before the ref stopped the fight. This dropped Ogle to 1-5 under the UFC banner and was the last MMA fight of his career.

The pick in this article is the opinion of the writer, not a Sports Chat Place site consensus.
Previous Pick
Tyron Woodley vs. Leon Edwards - 3/21/20 UFC Fight Night 171 Pick, Odds, and Prediction
Next Pick
What's The Latest Finishes In UFC History?